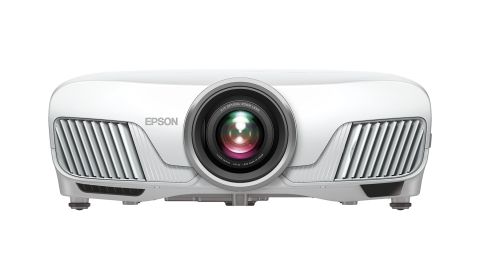 It may not be native 4K, but with images this clean, contrast-y and colorful it’s hard to argue with this massive projectors cinematic prowess.

That may a bit disappointing if you're looking to upgrade from a full HD projector, but the only brands currently selling projectors with native 4K pixel counts for regular-ish folk are Sony and JVC. That means you'll largely be comparing faux-4K projectors like the Epson 4010 to the likes of the BenQ HT2550 or TK800, and Optoma UHD60.

What makes them all faux-4K? Basically it comes down to a pixel-shifting technique that splits 4K images into two before alternately projecting them side-by-side to create the '4K enhancement' look despite the projector having only a Full HD chipset.

It's a workaround to using a full 4K panel, for sure, but it can look exquisite when done properly. And luckily, that's more-or-less what Epson has achieved on the 4010/EH-TW7400.

But is faux-4K just as good as the real thing?

The 4010/EH-TW7400 is massive and designed to stay put... just not on a flimsy table. We're talking a ceiling mount, or at least a big, heavy AV rack.

Available in black or white, it measures 520‎x450x193 mm and weighs 11.2kg - it's one of the larger projectors in its class and looks like something out of an actual movie theater.

The curved, rounded chassis lends a softer look for what could easily be an austere-looking machine, such is its size. However, the real design win is the sliding door lens cap, which auto-unfurls in two parts when the projector is activated, and vice versa when it's switched off.

Without Alexa or Google voice control offered by the likes of Optoma, it's left to a remote control to tweak the 4010/EH-TW7400. However, as well as being pleasingly large yet light, the buttons are logical and well laid out, as well as nicely backlit in orange upon any button press. However, you do need to press a specific button on the remote to wake the backlight, which slightly defeats the purpose.

The 4010/EH-TW7400 proved a cinch to set-up with an 80-inch projector screen. Its 2.1x optical zoom and throw ratio of 1.35-2.84:1 will be overkill for most rooms going for something less than its maximum 300-inch image, but what we really liked was the powered focus. When used together with the powered the vertical (96%) and horizontal (47%) lens shift, it means you can sit down while you set-up, and do everything on the remote. Who said remote controls were dead?

Ins and outs are found within a deep canyon on the back, and include two HDMI inputs (though only one of them is HDCP 2.2 compliant for 4K support), a VGA in for hooking-up a PC, an RS-232C for merging it with a home entertainment control system (such as AMX, Crestron or Control4), and a USB 2.0 if you fancy adding an (optional) WiFi dongle. There's also a wired Ethernet LAN slot.

Once you've done the basics, there are some picture enhancements to pick through or ignore, as you see fit.

Though it is hardly the kind of hub page found on most smart TVs, this projector is unusual in that its user interface has a dedicated homepage. However, instead of being with stuffed with apps, it merely provides panels for quickly choosing between sources and color modes.

The latter is a straight fight between Dynamic, Bright Cinema, Natural, Cinema and Digital Cinema, the first two of which do pretty well out of the box in daylight. A quick blast of daytime TV revealed plenty of bright contrast-y color, with the Bright Cinema mode excelling in ambient light.

The 4010/EH-TW7400 has a frame interpolation mode, which inserts frames to make motion sequences and camera pans look smoother. Nice idea, but the drawback is that the more frames are inserted the smoother the action gets, but the more you'll see some fizzing, flashing and snapping around moving objects.

It's presented here in three flavors – Low, Normal or High – and predictably it's the middle one that offers a good balance (the Low version isn't worth bothering with, and the High setting is almost unwatchable). Sadly, it doesn’t appear to work with live 4K TV broadcasts, which is a shame considering is sports-centric purpose.

So how does it do with 4K sources? With its '4K enhancement' toolbox on its second most powerful setting, Solo: A Star Wars Story is draped in detail. As Han and Chewbacca fight on top of the coaxium-carrying train, there's plenty of detail in the peaks of Vandor, while in the lair of Dryden Vos, there are lots of vivid colors on show in the room, and plenty of convincing blacks and shadow detail.

Detail is high despite the 4010/EH-TW7400 not being a native 4K projector, something that's more obvious if you take a step-down the video food chain and play a standards Blu-ray disc. Though WWII miniseries The Pacific is highly watchable, its Full HD images have a little less pizazz, with colors slightly muted and more uniform, and close-ups lacking the biting detail of 4K mode.

The 4010/EH-TW7400 is also able to deal with 3D Blu-ray discs, if anyone still plays them, though there are no 3D active shutter glasses in the box.

Are projectors the future, or the past? Some manufacturers are adding features like voice control, built-in speakers and streaming apps, clearly hoping that one day soon the projector can be a do-it-all hub to command the smart home.

Epson clearly doesn't give a jot about any of that, and has instead produced a highly focused attempt at a home cinema projector that's adept only at creating clear, contrasty and colossal 4K Ultra HD images.

It's not the greatest feature-set around – even Epson offers models with more bells and whistles (notably its step-up EH-TW9400, which adds Hybrid Log Gamma, 4K/60p HDR at 18Gbps, and Epson's 4K WiHD wireless transmitter), nor is as ultra-detailed as native 4K projectors – but the massive 4010/EH-TW7400's combination of must-have features and uncompromisingly cinematic images is impossible to argue with.