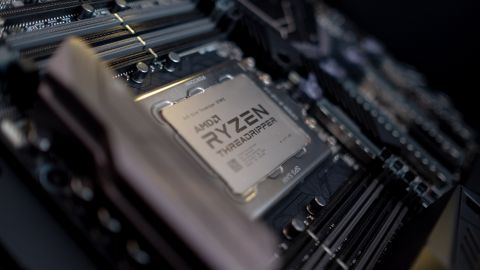 The AMD Ryzen Threadripper 2970WX impresses amongst the current crowd of HEDT processors, but the new Intel Core i9-9900K completely upstages it as a faster, cooler and more power efficient CPU.

AMD has been blazing a trail in the high-end desktop (HEDT) processor world, delivering some of the highest-core counts and greatest multi-core performance we’ve ever seen. The 24-core and 48-thread AMD Ryzen Threadripper 2970WX continues this trend by topping Intel’s more expensive Skylake-X processors that still only feature up to 18-cores.

However, AMD’s runaway hit may have finally met its match with the Intel Core i9-9900K, an 8-core, 16-thread mainstream processor of all things. Then, with newer Intel Core-X series Basin Falls Refresh processors on the horizon, it’s tough to recommend anyone should buy an AMD Ryzen Threadripper 2970WX right now.

Like the rest of the Ryzen Threadripper 2nd Generation family, this chip comes built upon AMD’s 12nm Zen+ architecture that delivers higher clocks and, of course, core counts hitherto unseen in processors available to consumers.

While we can talk all about Precision Boost 2 and Extended Frequency Range 2, as we’ve done in the past, AMD’s new Dynamic Local Mode is far more interesting.

Up until now, we’ve had to manually switch Threadripper parts between Creative and Game modes. To explain quickly, Creative Mode enables use of, and memory access to, all cores to boost multi-threaded performance for intensive tasks, like editing image, video processing and streaming. Game Mode, on the other hand, limits core usage to just eight and focuses on Core complexes with direct access to memory.

Switching between these two modes has been one of the most annoying parts about testing and using a Threadripper system, but Dynamic Local Mode will finally allow the system to automatically select the right one for the task. Not only does it work as promised, we saw almost no drop in performance whether we were running Cinebench or Tomb Raider.

Dynamic Local Mode should have been a standard feature for Ryzen Threadripper CPUs at launch, but we’re glad it's finally here.

In some ways, the AMD Ryzen Threadripper 2970WX performs better than we expected. Despite having eight fewer cores than the Threadripper 2990WX, this chip actually outclasses its big brother in our Geekbench and HandBrake tests, while keeping in step in almost all other benchmarks.

Of course, some of this is due to improved compatibility in applications and the newer BIOS we’ve since installed onto our motherboard, but this 24-core processor is definitely punching above its weight class.

Unfortunately, the Threadripper 2970WX’s impressive lead is cut short by Intel’s latest mainstream processor – of all things. Despite running with a much teenier complement of 8-cores and 16-threads, the Intel Core i9-9900K delivers higher single-core and multi-core scores, faster video encoding and better frames per second with gaming.

Normally we wouldn’t think of pitting a mainstream chip up against HEDT chip that costs more than twice as much, but Intel’s new CPU simply runs faster, cooler and uses 41% less energy.

Unfortunately, the Ryzen Threadripper 2970WX arrives just as AMD’s high-end desktop processor supremacy is coming to a close. Had it arrived in August alongside the Threadripper 2990WX and 2950X, we would have a better outlook for it – at least as good an outlook as $1,299 or AU$2,039 (about £1,010) processor can have.

If Ryzen Threadripper 2970WX’s only competition were the Intel Core i9-7980XE and Core i9-7960X, we would recommend it wholeheartedly. But, the Intel Core i9-9900K has completely upstaged it as the predominant high-end mainstream CPU. Moreover, Intel’s new Core X-series processors are just around the corner, so you’re best option for now may be to just wait.