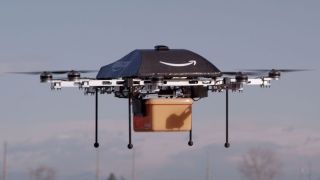 For hundreds of years our things have been delivered by people: people on foot, people on bikes, people in vans. But tech promises to change all of that, and to many observers the future of post looks distinctly non-human.

Are we entering the post-postie era, with deliveries increasingly made by drones and robots?

The Canadians certainly suspect so. In July, Canada Post said it was considering the use of drones to deliver packages, although at the moment it's a 'paper exercise' rather than an actual project.

Canada Post was reacting to the possible threat posed by Amazon's Prime Air service, which the online shopping giant says will use drones to deliver packages up to five pounds in weight (2.26kg) in less than 30 minutes.

Amazon also unveiled its very first Prime Air plane in August, although it's a little bigger than most of us expected: it's a Boeing 767 rather than a drone. The Boeing, along with other aircraft will be used to move packages from one side of the US to another, with drones used for the final leg, from distribution centre to the customer's home or office.

Amazon is currently running drone development centres in the US, UK, Austria and in Israel, and it's testing the devices "in multiple international locations". An official UK trial was announced in July, with the full approval of the UK government.

The big problem facing Prime Air is that commercial drones aren't currently legal in the US, its biggest market. That's a temporary obstacle, though, and the US FAA is expected to grant drones permission to fly between 200ft and 500ft (61m and 152m) at speeds of up to 50mph. The 500ft cut-off is where normal aircraft begin to operate.

You gotta roll with it

Firms aren't just testing drones that fly. In March, takeaway service Just Eat announced it would be trialling Starship Technologies' delivery robots in London this year. The six-wheeled robots have GPS and nine cameras, can operate over a three-mile radius, and are remotely monitored by humans in case they get lost or kidnapped. The robots can handle kerbs of up to 20cm, and can roll through snow up to 20cm deep.

Your first question is probably the same as ours: how do they stop people nicking the food? According to Starship the packages are protected by a PIN-protected lock, and during thousands of hours testing nobody's tried to nick any of the bots. "The vast majority of people just ignore it," CEO Ahti Heinla told the BBC. "People do not actually interfere with it on the pavement."

Speaking to The Engineer, Starship marketing manager Henry Harris-Burland explained that vandalism wasn't an issue either: "We've found that if you try and put your leg through the top, all that happens is that your leg gets trapped, and you end up walking around with a massive robot on your leg; it's quite embarrassing."

CEO Heinla wants "to do to local deliveries what Skype did to telecommunications" and is pitching the robots at all kinds of businesses, not just food outlets. And while the trials are currently in cities, the firm envisages its robots being used more in suburban areas – that's because city centres are just too busy for the bots, which prefer slightly less crowded pavements (and which would get really annoying if there were lots of them in already busy streets).

Will delivery robots face the same regulatory issues as drones? The answer is yes and no. The regulatory framework is less strict than it is for flying machines – there's no danger that rolling robots will fall from the sky – but the recent publicity over the legality of hoverboards suggests that the legislation in some places may need to be changed to make delivery bots road- or pavement-legal.

Google has been thinking about robot deliveries too, and its Project Wing may use both drones and rolling robots. Google's early PR concentrated on showing off a five-foot winged drone, a model that has since been scrapped, but a 2014 patent describes 'mobile delivery receptacles' – little wheeled robots – that take the delivery to its final destination, most likely a pickup point rather than a customer's home.

Project Wing has been paying as much attention to the regulations and environment around robotic deliveries as it has to the tech. It's working with Amazon, Verizon and Nasa to design a kind of air traffic control system for drones, with the support of the US government.

But will drone deliveries ever really get off the ground?

The pitch is simple enough: robotic deliveries are cleaner, quieter and cheaper than traditional delivery methods. And that's true to a point; if you don't factor in the actual costs of buying the robots in the first place, then such deliveries really are cheaper per delivery.

For example, Just Eat reckons it can bring the per-delivery cost down to just £1 "over time". However, that's based on a vision where companies such as Just Eat don't just invest in their robots, but in their own distribution hubs for the robots to use.

£1 per delivery sounds great – but remember, the robots we're talking about have very limited capacity. The Just Eat robots can only store two bags of stuff, and under the expected regulations delivery drones will max out at just over a bag of sugar. By comparison your postie, your local takeaway driver, your courier or your supermarket delivery driver all get a big load of stuff and deliver it to multiple addresses.

Capacity will increase over time as robot tech improves, but current models are limited: by the time a robot's delivered a couple's chicken korma, the human delivery driver has fed more people than Gordon Ramsay.

And those humans aren't paid very much. Couriers are generally paid around 50p to 65p per parcel, while at the time of writing UK Deliveroo couriers are protesting against a wage structure that they say pays many workers less than the minimum wage.

And then there's Uber, which hopes one day to run fully automated vehicles but which for now is undercutting existing delivery services with its human-powered UberRush and UberEats services. Delivery driving wages aren't brilliant, and the trend is downwards.

We love the idea of robot posties trundling around the streets, and drones dropping our day-one game releases from the sky, but right now the biggest problem isn't technical. It's that humans are paid so poorly, they make robots look awfully expensive by comparison.