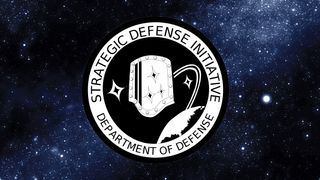 How, in the name of Hoth, did America go from the unbridled joy, optimism, fun and Freudian plot-twists of the original Star Wars in 1977 to the rampant real-world space-based warmongering of Ronald Reagan's own 'Star Wars' Strategic Defense Initiative program in 1983?

Over the course of six years, the greatest popular sci-fi movie of all time become co-opted into one of the most dangerous military PR initiatives of our age - all due to the 40th American President's own terrifying Star Wars nightmare.

US president Ronald Reagan cooked up a dastardly plan and decided to co-opt "The Force" that was the immense mass popularity of Lucas' space dream to justify his space-based warmongering initiative known as The Strategic Defense Initiative (SDI), or 'Star Wars' for short.

It was, after all, the 1980s. The decade that media spin and PR became more important to politicians and nuclear war fans than boring old-fashioned things, such as well-thought-out defense policies and world peace.

Clearly there was a symbiotic relationship between the popularity of Lucas' inspiring dream-world and Reagan's own dark Cold War thinking over how to combat the perceived threat of a Russian nuclear attack.

What does SDI mean for the future of warfare?

If you grew up in the US in the 1980s, you lived in fear of this stuff daily. Imminent and potential nuclear attacks dominated the news agenda of the decade.

All of which meant that, under the relative safety of your duvet at night or days spent playing space-based war games such as Elite on your BBC Micro, you dreamed the worst possible thoughts about Mr Reagan's killer nuclear missiles from space.

On March 23, 1983, President Ronald Reagan – the former Hollywood actor who was revered for not taking any nonsense about the perceived threat from the USSR – launched the Strategic Defense Initiative (SDI).

The SDI was basically a space-based anti-missile system, which, for the benefit of the media, was dubbed 'Star Wars' - A PR initiative that Reagan was canny enough to realise would dominate the world's news channels' agenda at the time.

As Michael Jackson's Thriller and Madonna were dominating MTV that year, Reagan's press people realised that space-based nukes were the way to dominate the evening news.

The SDI was basically presented as a way of defending the United States from any impending attack from Soviet intercontinental ballistic missiles (ICBMs) by cleverly intercepting any attacks from space.

The details on this were (and still are) pretty sketchy, to say the least. The idea was based on lasers, as many great ideas since - Laser Quest and laser surgery included - have been.

The main difference here was the fact that Reagan's space lasers to take down USSR nuke attacks were not really as well thought out or as developed as kids' laser-based shoot-outs in warehouses or eye-fixing laser operations.

A garbled yet successful PR campaign

Instead, there was a garbled PR message that the 'Star Wars' SDI would use a clever mix of radar, optical, and infrared threat-detection technology systems. To be fair, it sounded good, and most journalists and editors at the time (in the US and Europe, at least) bought it, hook, line and sinker.

There's just no way, in today's world of consistent technology industry coverage online, that such PR guff would ever have got off the ground.

Still, it gave broadcast news producers something to talk about and it also gave us, the members of the frightened average Joe populace, some form of reassurance that we weren't going to enter a new ice age at any point in the 1980s, thanks to the above-mentioned technologies being deployed in space.

Eventually, the technological complexities of Reagan's dubious space defense system vision proved to be the undoing of the 'Star Wars' initiative.

Not to mention the fact that it was costing American taxpayers billions of dollars. $30 billion, or thereabouts. Which is the cost of a lot of decent Hollywood science fiction movies, even if you factor in the fees of Carrie Fisher, Mark Hamill and Han Solo (sorry, Harrison Ford!).

It's also a lot of money to spend on land and space-based defense systems if you consider the fact that not one of these expensive tech guns was ever used. And never will be.

How did it end?

Let's not forget that, in 1989, the Berlin Wall came down. And, with it, the insane drive to nuclear annihilation that was The Cold War. Which pretty much put paid to the Strategic Defense Initiative.

One of the stranger things that came out of Reagan's big plan, however, was a 1986 computer game inspired by the SDI initiative, taking its name and mashing it with a plot similar to From Russia With Love.

All of this from a president who wanted to cash in on the world's love for Star Wars.

Explore all of our Star Wars Week content. Come over to the Dark Side...