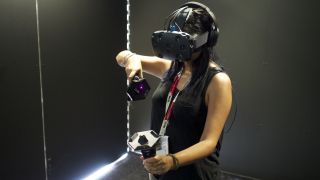 It looks like Samsung Gear VR will officially be the only consumer VR headset to launch this year, with HTC announcing the HTC Vive headset will now launch in 2016.

With dev units sold earlier this year, HTC had previously planned to launch at least a limited number of final HTC Vive VR headsets by the end of 2015, but it has now announced it won't be going on sale until next year

The company made the announcement in a blog post, saying it hoped to "clear up speculation and misinformation" about the launch date.

Unfortunately, HTC didn't give a clear reason for the delay, saying only, "We remain committed to delivering the HTC Vive to a broader group of content creators and partners, and remain focused on delivering the very best experience possible for a consumer release."

Instead, the company will now launch a second generation of the dev unit at CES 2016, make 7,000 more units available to developers during the start of 2016, "followed by commercial availability in April 2016."

HTC also promises to provide more opportunities to try out the HTC Vive headset in the lead up to its launch, including expanding it's demo tours, as well as offering demos at events such as at the Sundance Film Festival, SXSW, GDC and MWC during the first quarter of next year.