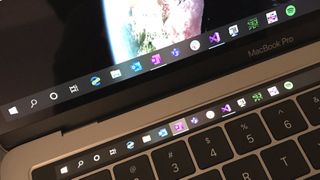 Since Apple introduced the Touch Bar, a slim OLED panel that sits above the keyboard, in its 2016 refresh of the MacBook Pro, people have been divided over how useful the feature actually is. Now, however, a developer has found a genuinely beneficial use for it – but only if you’re running Windows 10.

A developer on GitHub has proved that it’s possible to display the Windows 10 taskbar – which holds the icons and shortcuts for your applications – on the Touch Bar, which would make it easy to open up and switch between Windows apps, and could mean that you don’t need to show the taskbar on the main display, giving users more desktop space.

It’s certainly a clever hack, and it shows a lot of potential for running Windows 10 on a MacBook Pro. It involves using Microsoft’s USB Common Class Generic Parent Driver (USBCCGP) and a modification to the Windows Registry, along with a driver to support FrameBuffer transfer.

According to the developer, this custom-made driver allows the taskbar to appear on the Touch Bar, and it can respond to touches.

The project is still in early development, so it’s not available for people to try themselves, but the results are promising – and it shows there are people out there coming up with novel ways to make use of the Touch Bar.

Of course, if this project does see the light of day, it won’t be officially supported by Apple, and it will only work if you run Windows 10 on a MacBook Pro.

There are plenty of reasons why you’d want to run Microsoft’s operating system on Apple’s hardware, and this new feature could make using that combination even better in the future.