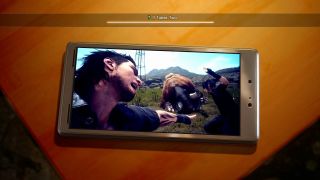 It’s here. It’s actually here. More than a decade later, a couple of names changes and more interim spin-offs than you could shake a chocobo at, Final Fantasy XV has arrived. And with 2016 quickly becoming our collective ‘annus horribilis we’ve been in need a little bit of good news, so Noctis and his (boy) band of armed male models have arrived to cut down our gloom with their razor-sharp cheekbones.

So to celebrate its release, we’ve gathered together six ways Square Enix has crafted a full-on Final Fantasy that’s both a nod to the entries of old and a clever infusion of the many action-oriented spin-offs that have take the series in exciting new directions. Kupo!

For the first time in a proper, non-MMO numbered entry, Final Fantasy XV is abandoning the turn-based battle systems that have been a mainstay for the better part of 30 years (and yes, we're still firmly counting FFXII as a turn-based game), opting instead for the instantaneous satisfaction of an action-RPG that's more akin to Crisis Core: FFVII than a mainline game.

Such a system will be instantly familiar to newcomers who may have spent time with Geralt in The Witcher 3 or the Chosen Undead in Dark Souls III, with Noctis and his crew able to shoot, slash and warp their way through dynamic skirmishes. It’s the one big change that will make veterans balk, but it’s a must for FF to feel relevant in the modern gaming sphere.

It's the right kind of open-world

Final Fantasy XV’s semi science-fiction setting isn’t the first time the Japanese action-RPG has embraced some of the tenants of the open-world (XIII-2 being one of the first to finally break away from the linear constraints of predecessors), however Square Enix is taking that often nebulous term and making it work to the series’ advantage.

The game is split up into interconnected regions (think Dragon Age: Inquisition), each with their own kinds of enemies and landscape, but you can still traverse the entire thing inside your Regalia sports car or rely on fast travel. There are even side-quests galore, making all those gorgeous vistas serve an actual purpose.

It's a graphical tour de force

That’s a lofty claim, especially with the likes of Batman Arkham Knight, The Witcher 3: Wild Hunt and Hitman already making you weep with beauty, but it’s one we make with absolute certainty. Final Fantasy has always been a graphical trailblazer (remember how FFVII was meant to be a N64 game, but instead made the jump to PS1 when Square realised that chunky cartridge couldn’t handle its scope) and FFXV carries on that tradition in fine form.

For once, the game we’ve been shown in press events and expos is the one we’re really getting. Watch Dogs this is not - game world Eos is a gorgeous, pastoral wonderland that opens up like a living photograph as you cruise along its highways.

While we all look back on the glory days of Final Fantasy VII and its iconic plot twists, things started to take a turn for the convoluted from FFVIII onwards. It’s a trend that’s contributed to this seemingly impenetrable wall of fandom that’s made FF less and less appealing to newcomers.

FFXV looks to change all that. Okay, Kingsglaive (the prequel film that sets up its story) isn’t brilliant, but it’s a world away from the nonsense that was Advent Children as it sets up the familiar ‘hero with a birthright fighting for his life’ blueprint that’s been a FF mainstay for years. With Noctis at its centre, FFXV is a melodrama for new and old fans alike.

You get to drive a flippin' car!

Okay, by this stage in gaming history, we’ve driven so many four-wheeled motors around virtual worlds the experience has gone beyond ubiquitous, but we’ve yet to take a grand tour at top gear in Final Fantasy. Until now…

Final Fantasy’s open-world navigation comes in the form of a car, but not just any car - a sports car. The Regalia isn’t just your means of zipping about Eos, it’s your very own fist-bumping bro trip. You can switch driving over to one of your NPC party members and sit back and enjoy songs on the radio plucked straight from FF history.

The Final Fantasy games have always trodden a fine line between fantastical and modern, but this entry's car is the most modern nod from the series yet. It’s contemporary meets fantastical and for some bizarre reason it really works. Oh, and it turns into a plane.

You're party is a proper family

There’s a real Entourage feel about Noctis and his three wingmen - the burly Gladiolus, the cocky Prompto and the food-loving Ignis - and that connection is something the team behind FFXV has promoted from the start. That centrepiece brotherhood brings a whole new dynamic to the series and it’s one that more family than fraternity.

FF is known for its parties, but they’re often full of characters that you're constantly juggling in and out of your main squad. In contrast FFXV builds its emotional heart around Noctis and his much smaller number of pals, creating a bond that makes sharing this new world that much more enjoyable.

Yeah, at their worst they’re a bunch of dudebros, but at least they’re likeable dudebros. Even if they do look like porcelain male models.