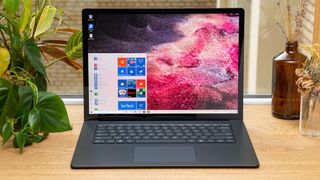 Microsoft’s Surface Laptop 3 (15-inch) has been given the teardown treatment with iFixit finding that the new notebook is far more repairable than its predecessor – as Microsoft had promised.

However, it’s only friendlier on the repair front in relative terms, meaning that iFixit awarded it a passable 5 out of 10, as opposed to the big fat 0 out of 10 which the Surface Laptop 2 received. If you recall, the iFixit team memorably remarked that they would have given the device a negative score if that was possible.

So instead of the ‘glue-filled monstrosity’ that was the Surface Laptop 2, the third iteration of the notebook is easy enough to get open, with the only obstacle being four Torx Plus screws (which are hidden under the rubber feet at the four corners of the laptop).

As shown off by Microsoft at the Surface Laptop 3’s big reveal, iFixit observed that there is, indeed, a removable SSD. This M.2 SSD is easy to access and replace, iFixit noted, although it’s not supposed to be user removable, because as we recently reported, the drive is supposed to be upgraded by a “skilled technician following Microsoft provided instructions”.

Possibly suggesting that you may have to take it to a Microsoft Store or third-party repair shop to upgrade the SSD, but seemingly from iFixit’s findings, it’s easy enough to replace DIY style. The only potential caveat there is that this could possibly void your warranty, of course…

There are still issues here, though, and the battery remains heavily glued and very difficult to remove just as before, plus the RAM is soldered on (so can’t be upgraded). Furthermore, iFixit notes: “While many components are modular, intricate layered construction makes them difficult to service.”

So hence the middling result, but as mentioned, this is a lot better than wanting to award the previous Surface Laptop a negative score, for sure.