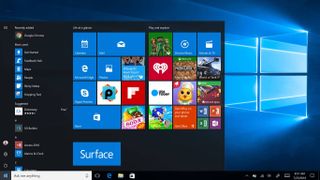 Remember how Windows 7 (and Windows 8 … and Windows 10) would ask you whether you really wanted to install that app you just downloaded, like a passive aggressive parent to their twentysomething kid's every decision? Well, Windows 10 still does that by default.

But! But, with the massive Anniversary Update landing on August 2, Microsoft's operating system (OS) will have come leaps and bounds to respect our common sense in nearly every marquee feature.

That's because it took a lot – and we mean a lot – of input over the past year to get here.

Windows 10's coming of age by the numbers

We all know that the OS is running on more than 350 million PCs, laptops and other devices, but that's amounted to over 135 billion hours of use since launch. When you consider the telemetry that Microsoft (like any other OS provider) gathers from Windows 10 usage, that alone should be telling enough.

However, with its Windows Insider Program, Microsoft has been able to receive more directed feedback straight from its most dedicated users across 25 builds on PC and 16 mobile builds. That's amounted to a veritable ton of input from users for the Redmond campus to digest.

Specifically, Microsoft claims that nearly 75 million pieces of feedback went into the more than 5,000 enhancements found leading up to and within the Anniversary Update.

And so, with all of those common sense requests feeding into the development of the OS, it's come out on the other side with a lot more respect for our time and sensibilities.

As if required by law, Microsoft wants you to know that Windows 10 is the most secure version of Windows. But, the Anniversary Update introduces security features that make you wonder where they've been all this time.

Microsoft is putting a lot of trust in its users with lock screen Cortana and Windows Ink features, which both Windows veterans and otherwise denizens of the modern world should appreciate.

For instance, the OS finally allows you to schedule automated, periodic Windows Defender scans. (And these scans are said to work fine on top other automated virus scans, like McAfee or Norton.) Plus, the service now provides more detailed summaries when threats are discovered. Kind of seems like a no-brainer, right?

Further to the goal of security, Windows Hello – Microsoft's multi-factor biometric security solution – has been expanded to work within the OS and on the web. That means you can secure your purchases in the Windows 10 Store with an eye scan or fingerprint, or do the same in, say, the DropBox app. Various websites are supporting the technology as well, but only in Microsoft's shiny new browser, Edge, at the moment.

Expanding Windows Hello to other browsers is entirely possible and Microsoft has said as much, but naturally the company is going to support its own services first.

What are perhaps even more important than Microsoft's security enhancements in the Anniversary Update are those that intimate trust in the user. With this update, more core Windows features are accessible from the lock screen than ever.

That's in part because every Windows device issued today is required to include a TPM, or trusted platform module, chip inside from which Windows Hello retrieves your secure login information. This allows you to, say, ask Cortana to schedule a reminder for you or change the music currently playing in Groove or Pandora from the lock screen.

It also lets you summon the new Windows Ink workspace (more on that in a bit) from a button press on your stylus, without logging in, to jot down that Sticky Note before you forget. Now, since both of these tools could reveal sensitive information, you can set certain parameters so that only select Cortana reminders – those that don't include your calendar, email, messages and Power BI data – appear on the lock screen.

That said, if you were to ask Cortana to remind you of your flight number or a new password you just created, that's on you if it appears on your lock screen and you didn't want it to. Some might look at that as an oversight, but I see it as, again, respect for our common sense.

If you don't want someone at the local coffee shop doodling obscenities on your Surface Pro 4 without having to even log in, or seeing where your next meeting is, maybe you should take your device with you to the counter to order that next latte. In fact, you should probably be doing that regardless already.

Microsoft is putting a lot of trust in its users with lockscreen features like this, which both Windows veterans and otherwise denizens of the modern world should appreciate.

And now, those same folks have more reason than ever to start using that Surface Pen that came with their device or some other stylus, thanks to Windows Ink.

When it comes to beaming directions to your phone, Cortana can do it to any app, not just Bing Maps.

No longer just the de facto tool for artists and contractors, Windows Ink opens up apps like Sticky Notes and tools like Screen sketch to make styluses useful for far more people. Sticky Notes now recognizes pen input and can even translate your etchings into lists with brief hyphen delineations.

And, with Cortana enabled, you can turn these stickies into reminders that the personal assistant can take along to any mobile device you use the Cortana app on. The location-sensitive grocery list is the most obvious example here. Finally, Sticky Notes can recognize dates, URLs, stock symbols and more using Bing data to fill in the blanks.

The new, low key Sketchpad app is a free space for you to jot down anything from doodles to full blown pieces of work. But, it's the new digital ruler that's one of the ultimate "duh" updates in this suite – better late than never.

And, if you work in any field relating to the web or other technology, then the Screen sketch tool is going to be a god send. With this, you can screenshot whatever is on your screen and doodle on it. See a nasty bug on your website? Tell the development team quickly.

Even if you see something funny online, sharing those moments just got a little easier.

A bunch of Windows apps now support stylus input as well, like Office, which makes marking up a bit more personal if not easier. Speaking of which, OneNote now includes a number of neat new ink types, like a galaxy-colored one, and will also soon support handwritten math equations.

We saw it first hand recently, with a demonstrator writing out an algebraic equation and having OneNote list out the steps in detail in a sidebar. These can then be rendered in standard text for, say, homework submissions. While the feature, known as OneNote Ink Math, won't be in the August 2 update, know that it's on the way later this year.

Finally, some reasons to use that stylus for more than just artsy fartsy types (sorry) – who would've thunk it?

Cortana just developed a lot of common sense herself

With nearly every update, Microsoft's personal assistant has developed more into a sensible means of getting day-to-day tasks done faster. Now, with access to Cortana from the lock screen, you can ask her to simply remember arbitrary stuff for you.

With this update, Windows 10 is the most trusting and respectful of the users and their time that Microsoft has ever been with an OS since Windows 95.

"Hey, Cortana? Remember that I parked on P2 in aisle H."

"Hey, Cortana? Remember this beer that I had with dinner." To which you can now add a photo of said beer so that neither of you forget for certain.

Before this update, Cortana was rather limited in what she could retrieve for you when asked where something was. Now, she can search within documents rather than just their titles. What this should mean is fewer times the assistant just throws a Bing query in your face.

But more so than just getting smarter on your computing device of choice, Cortana now works better across devices. For instance, the assistant can read off Facebook messages and texts for you from any Android or Windows 10 Mobile phone – and you don't even need the apps installed locally to reply. (We're told that Microsoft is working on this for iOS.)

When it comes to beaming directions to your phone, Cortana can do it to any app, not just Bing Maps.

Ultimately, Cortana is growing to become a more natural way to get the small things out of the way. Does it have a long way to go in terms of language processing? Absolutely, but so does every virtual assistant out there. What's key here is how Cortana is being applied and how pervasive it's becoming, so that using her becomes, well, common sense.

Microsoft's OS may have rested a bit on the fact that it's been free for the last year, but that time is all but over. Now, Windows 10 needs to simply make sense for you to want to upgrade, and the Anniversary Update goes a long way to not only making sense but respecting our common sense way of using technology and expecting it work in 2016.

For instance, Edge finally, finally supports extensions. Couple that with Microsoft's immense claims of 17 to 70% more battery life when using Edge over the competition, and you have a browser that might make more sense to use.

Here's another example: Live Tiles at last direct you to the content within the app that's currently displayed. Why this wasn't the case before is beyond us, but just be glad it is so now.

When Windows 10 first released for free almost a year ago to the day, it was a great OS, but it was far from a complete one. And none of this is to say that Windows 10 is complete now with the Anniversary Update, but it's certainly closer than it's ever been.

With this update, Windows 10 is the most trusting and respectful of the users and their time that Microsoft has ever been with an OS since Windows 95. And, with the company's new software-as-a-service approach to Windows, coupled with the constant flow of feedback it's getting, the future of Windows stands to only be more sensible.

Will there be missteps along the way like there were this past year? Probably, and Microsoft still has a lot of walking and talking back to do from those. Consider an OS that brings the features that you've come to expect – and some you haven't, but just make sense – as a strong foot forward in that direction.

This article is part of TechRadar's Windows 10 Week. Microsoft's latest operating system turns from a free to a paid upgrade on July 29, and we're looking to answer the question of whether it's good for you.