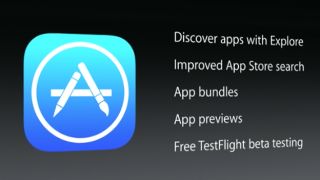 These App Store improvements will arrive in the fall

Apple's WWDC 2014 was filled with big announcements like iOS 8 and OS X 10.10 Yosemite, but nestled among them was the impending introduction of some improvements to the App Store.

The most interesting changes coming to the App Store are new tools for developers: app bundles, videos in app listings, and the integration of TestFlight.

There are some minor improvements to searches coming, as well, including some new tools for users.

With app bundles, app makers can now bundle their apps together and sell them at a discounted price, allowing users to purchase multiple apps at once with just a few taps.

Devs will also be able to embed short videos in App Store listings to show off apps' features - much like in Android's Google Play store, where developers can embed YouTube videos.

And the official integration of TestFlight into iOS will likely make it easier for developers to let users test early, in-progress versions of their apps before they're released.

iOS users will soon have access to a new "explore" tab where they can browse through categories and sub-categories, with the aim of making it easier to discover the right apps.

Users will also be able to view trending searches to see what's popular, and searching will be faster, especially with new continuously scrolling lists of results and a "related searches" feature.

"We are really investing a ton in the App Store," the CEO said, adding that these improvements will arrive in the fall.