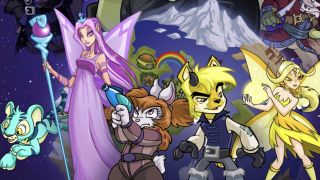 Back in the mid-2000s, all the kids – or at least myself and my siblings – were on it. As an online portal for collecting and caring for virtual creatures in the vein of a non-violent Pokémon, or less work-intensive Nintendogs (so much petting!), it provided a few too many hours of distraction throughout much of the decade.

We weren't the only ones, either: in 2005 Neopets had over 35 million unique users, and is still very much around today, even if today it doesn't have the cultural sway of, say, Fortnite or even Club Penguin.

This technically won't be the first time Neopets have come to the small screen, with small vignette appearances on Nickelodeon between its programming – but it will be the first time our beloved N-pets have got a dedicated show all to themselves.

Neopets TV show? It’s happening. Read more about our collaboration with Beach House Pictures and what we have planned for this new project! https://t.co/dnm4y5VBYa pic.twitter.com/1DpofXx3m8February 10, 2020

Will the Neopets be any good? It will almost certainly stay targeted at the young demographic that the brand is known for, so there may be limited enjoyment in it for those of us who spent hours caring for our virtual pets (i.e. feeding them omelettes).

There was an overarching narrative of sorts, with regularly-released comics giving an insight into the oppressive regime the adorable Neopets found themselves trapped in – though we'll see how biting the social commentary really is when the show releases.

As a Canadian broadcaster, and one that only started producing children's content in 2016, the reach of the show may also be limited – though in any age of streaming, where everyone from Netflix to Hulu is looking to nab exclusive series, there's no telling where popular shows could end up.