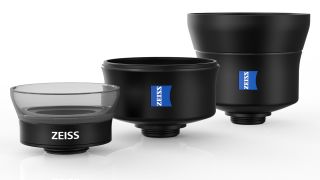 We've seen clip-on mobile phone lenses before but this is something new. Zeiss is best known for its top quality camera lenses, with a reputation stretching back decades but its eyes firmly on the future – it makes professional Zeiss Otus lenses for today's DSLRs and Batis lenses for mirrorless compact system cameras.

The optics are from Zeiss, but the mounting system is by American company Fellowes and its Exolens phone bracket. This fixes to the smartphone's body with a locking mechanism and incorporates a tripod socket in the base.

Fellowes already makes its own Exolens lenses, but the Zeiss optics are designed for the highest performance levels. They include a wide-angle lens, a telephoto and a macro lens.

The wide-angle and the telephoto lens use an optical design Zeiss has dubbed Mutar. This refers to the 'afocal' construction – the Mutar lens itself is focused at infinity and the focusing is left to the smartphone camera's lens.

The Mutar 0.6x is the wide-angle version, reducing the iPhone camera's effective focal length to around 18mm.

Both lenses include aspheric lens elements to combat distortion and prevent the bowing of straight lines near the edge of the frame – a common problem with clip-on smartphone lenses.

Zeiss's clip-on macro lens has a unique property – a continuous zoom function that lets you fill the frame with objects between three and twelve centimetres across. This is where it gets the name – 'Vario' for the zoom function and 'Proxar' for its close-up ability.

That's not the only unique feature. This lens also has a semi-transparent spacer/diffuser for easier focusing when you're really close to the subject and to allow light to shine on it evenly.

"The lenses of ExoLens with optics by ZEISS are the best currently available on the market," says Dr. Winfried Scherle, Executive Vice President of Carl Zeiss AG and Head of the ZEISS Consumer Optics business group. "We have achieved the best possible technical balance between a small size, low weight and high image quality."

To start with, the Exolens Zeiss optics will be available only for the iPhone 6/6S and 6 Plus/6S Plus and these won't be available until the middle of 2016. Versions for other smartphones are planned.