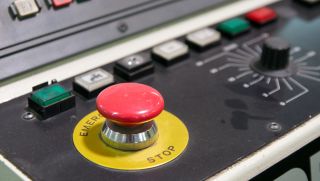 Imagine for a moment that you're President of Earth. You've had a good run, but the alien warlords are closing in, and you need to act. You get to press the infamous apocalypse button, to unleash hell on their extraterrestrial asses - but you've got a choice.

You can either slap your palm down on a massive, domed red button labelled DO NOT PRESS*, or tap an on-screen graphic of one. Which of those would you rather use to obliterate the mothership?

You're going to mash the big red physical button, and you know it.

The fact is, physical keys are far more satisfying to press than virtual ones, a sensation that sends a mini wave of bliss up our fingers whenever contact is made.

Why, then, have most phone manufacturers cut them to the bare minimum? Well, for starters, there's the cost issue: with razor-thin profit margins, it doesn't make sense to pay for a button when you could just put a picture of one in the UI.

Secondly, software buttons are more reliable. You can't bash, lose or gouge out a virtual key - although of course you can smash your screen.

Yet despite solid arguments against them, there are still physical buttons on almost every smartphone. Buttonless phones have been made - one came out in 2014, and it's rumoured that Apple might drop the iPhone home key - but they haven't caught on as yet.

Why? Perhaps because we're still holding onto our love for the button-tastic handsets of old. Ask a tech fan their favourite phone ever, and it'll almost certainly have a keypad: the Droid, the N95, the BlackBerry Pearl, the HTC Dream, and of course the unforgettable Nokia 3310.

We're probably not going to buy a full QWERTY in 2016, but a phone with nothing to press feels a little soulless - and worrying that if it breaks, we'll need a computing degree to fix it..

It's just not the same

The fact is there are some aspects of physical interaction that digital still hasn't improved on, or even equalled.

Take to-do lists: there are a billion apps for creating and managing them, but not one has ever felt as good as striking through a completed task with pen to paper.

This is one reason the stylus has proved surprisingly resilient despite repeated predictions of impending death - so much so that one of the top phones of 2016, the Samsung Note 7, has one. It also has a physical home key, and that's no accident.

Samsung, it seems, understands that humans are tactile creatures. We don't need a curved phone screen, but it feels good to touch one, and that's OK. Similarly, pressing a home key all the way feels a thousand times more satisfying than tapping the same-sized fingerprint pad on, say, the HTC 10. The Galaxy home button is flanked by two capacitive soft keys, but its main button - its key key, if you will - sits high and proud above the bezel.

The smartphone market is fiercely competitive, and physical buttons unsurprisingly cost more than software keys. So why does Samsung make the outlay when competitors like Huawei's P9 offer digi-buttons only?

Conor Pierce, Vice President of IT & Mobile at Samsung UK & Ireland, explains: "We spend a lot of time looking at how people use their mobile phones, and having a physical home key is a feature Samsung customers know and love.

"A physical button makes it even easier for people to use their smartphone, especially on the move, as they can switch between apps or bring up their camera with a simple double press, all with one hand. It also means there's no on-screen keys taking up space from the display, meaning fewer disruptions when looking back through your snaps or watching a film."

What he doesn't mention is that alongside Galaxy fans, iPhone die-hards are also used to a physical home key, and would therefore find the switch to Samsung easier. That's smart, and it'll be interesting to see whether other manufacturers follow suit if and when Apple drops its home button.

Familiarity isn't the only benefit of sticking with real buttons. Most smartphone buyers are anti-bezel, preferring the screen to take up as much space as possible on the front of a phone to maximise space.

If a handset's going to have a panel at the bottom, as many have to, it had better have a purpose: the alleged Nexus Marlin/Sailfish leak has been pilloried online for having a bottom bezel with no keys; capacitive or otherwise. Not surprising given that it's apparently made by HTC, a brand well-known for having a giant logo bar across the bottom of its phones.

Real keys are easier to use, too: you can find them without looking, they're better for older or less agile hands, and they still work when the screen's off. This is why we've kept tactile volume buttons, making it easy to turn down Taylor Swift without pulling your phone out and having to scrabble about on screen.

Apple and OnePlus handsets, among others, have a physical Do Not Disturb slider for the same reason: you can't subtly silence your phone in front of your CEO when you have to unlock your phone first.

And while phones are losing them to preserve aesthetics and space, it's a heck of a lot easier to touch type on real keys than a screen - if it wasn't, laptops and desktops wouldn't still have full QWERTYs.

Even tablets are often designed with a keyboard in mind - think iPad Pro or Surface Pro. And frankly, it's going to be a very long time before haptics offer something as gleefully clickable as a mechanical keyboard. Fancy typing your novel on a screen? Didn't think so.

There's no denying that most of us don't buy physical keyboard-endowed phones anymore, and never will again. But there's a small, hardcore group of QWERTY-lovers still willing to swap their cash for a more traditional typing experience - they're called BlackBerry fans.

We asked BB what it is about QWERTY phones that keeps people coming back. Logan Bell, Senior Device Portfolio Manager at BlackBerry EMEA told us, "Many users prefer a physical keyboard as it offers more typing accuracy and leaves more screen space for viewing. A physical keyboard also lets the user know they have hit the right letter with just the right amount of feedback (or 'clickiness') that allows for confident typing without looking."

BB has often been accused - sometimes by us - of failing to move with the times. But while it finally started offering Android phones in 2016 with the launch of the BlackBerry Priv, it has never given up on the physical keyboard - and the QWERTY-slider Priv became one of the most talked-about handsets in years.

Granted, the Priv will never outsell the big names, and a big part of the reason people talked about it is that they hadn't seen a keyboard Android in years.

If a touchscreen Nokia 3310 came out tomorrow, it'd be the top story on every tech site, but that doesn't mean anyone would buy it - a novelty when people need practicality.

Still, BB keeps putting its eggs in the relatively small keyboard basket because no one else is serving that market, which means it owns it.

And having a niche in the overcrowded Android market is no bad thing. The BlackBerry Passport, with its always-out QWERTY, sold far more than industry naysayers expected - and other manufacturers have been watching with interest.

Samsung, for instance, now sell a clip-on keyboard for phones including the new Note 7. As we move towards modular phones, add-ons like these make a lot more sense.

Besides, it's not like physical keys haven't moved with the times. Samsung and Sony phones, among others, build their fingerprint scanner into the home key, and BlackBerry keyboards have all kinds of extra talents, such as using the keyboard as a large trackpad.

What's next for buttons?

The way we interact with the world is evolving at a pace that makes next-gen tech predictions much harder, but there will always be a place for buttons. They're proven to be better for gaming, and even if they weren't, they give us a reassuring feeling of control - even if they don't do anything. That's right, placebo buttons exist, and you've been happily pushing them all your life. Sorry.

Over the next few years, the physical and digital worlds will merge in ways we can't imagine yet, and yes, the humble button will be along for the ride. It's happening already: Amazon makes physical buttons that sell digital products, while keyboards like the Optimus Maximus let you change and customise real, physical keys as if they were software.

But that's just the beginning.

Future buttons might appear and disappear at will. They might be made of ultrasound waves. They might even be tactile illusions wired directly to the appropriate neurons, eventually. But they will be there, and you will push them. Especially if someone tells you not to.

*The Nuclear Football isn't actually a big red button. Disappointingly, it's just some codes in a briefcase. But that wouldn't make for a very good opening paragraph, would it?