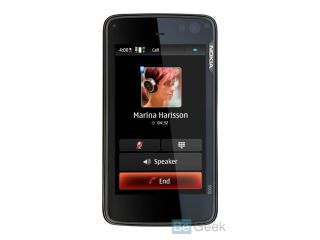 Nokia's official marketing shots for the forthcoming flagship N900 phone have been leaked onto the 'net, showing off the Finns' new OS as well.

The N900 is running Maemo, previously only used on Nokia's Internet Tablet range, and is designed to bring a new level of functionality to the high-end smartphones.

The N900, recently pictured and extensively previewed, is likely to be announced next week at Nokia World in Stuttgart, and the presence of an official marketing shot seems to back up that pledge.

New and old together

The new picture shows the device in a standard calling mode, so not too many clues can be gleaned from it, but according to those who have seen the new OS, it adds in a fair amount of new functionality.

The N900 features a huge 3.5-inch display, a GPS chip, around 32GB of internal memory, and obviously the super-customisable Maemo OS and new interface.