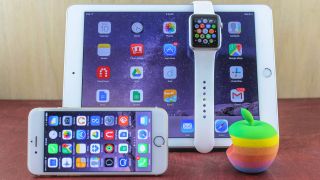 Apple claims iOS 10 is its biggest iOS release ever, and there's certainly plenty to get into your teeth into – but how does it differ from the software currently running on your iPhone or iPad?

We've pitted the two iOS revisions head to head to show just what you can expect from the new iOS 10 update.

One of the biggest updates on iOS 10 is Siri, which has been made even smarter and it's now open to developers. That means you'll start seeing the personal assistant pop up in third party apps too.

On iOS 9, Apple introduced Siri Suggestions which displayed contacts and apps it predicted would be most useful to you at a particular time and location. It also offered up smarter answers to requests – but not on the same scale as the iOS 10 update.

Because Siri is now open to third party apps, you'll be able to say things like "Send a WeChat to Nancy saying I'll be 5 minutes late", and it'll do just that. Siri is also now smart enough to understand that command in a variety of ways, which means you don't have to say phrases in a set order for it to work.

That's what Apple claims anyway – we'll remain on the fence until we actually get a hold of it.

With iOS 9 very little changed with Apple Maps, which in itself is an offering which has played second fiddle to the impressive Google Maps. That changes with iOS 10.

The new Maps app not only sports a new design, but Apple's also made it proactive. That means depending where you are, and what time it is, it can suggest routes, restaurants and places of interests it thinks you'll want to know about.

Navigation has also been improved with live traffic, a zoomed-in view when you approach junctions and easier to follow directions. It plays even better with Apple CarPlay too, and can display directions in the instrument cluster if your vehicle has that support.

The big thing with iOS 10 is Apple opening up its core apps to third party developers, something which is still very much closed off in iOS 9.

That means in the new Maps you'll be able to book a table at a restaurant and order, track and pay for your Uber without having to leave the app.

Apple continues its all-apps-are-open matra with the Phone app, allowing developers access to the core calling API which means whatever call you receive, from any application, it'll display and act like a standard telephone call.

On iOS 9 calls from third party apps appear as rather basic notifications, giving a disjointed user experience. With iOS 10, everything is far more fluid.

Another smart feature in iOS 10 is Voicemail transcription – giving you a text overview of the message someone has left, allowing you to ignore spam without wasting time listening to it. The same goes for Apple's new spam detection service, which can flag potentially troublesome calls before you answer them.

Messages has been given a major overhaul with bigger emoji, smarter emoji prediction, an easier to access camera without moving away from the stream, handwriting and a range of digital touches and effects.

All in all, it gives users far more options over the rather bland bubble chat we currently have on iOS 9, but many of the features look suspiciously similar to Google's Allo app which it announced at IO 2016 last month.

Apples' News, Music and Photos apps have all been given a clean lick of paint over their iOS 9 variants.

The iOS 10 apps have a fresher, cleaner, brighter look which Apple claims make them easier to navigate, while surfacing the best content for you at any given time.