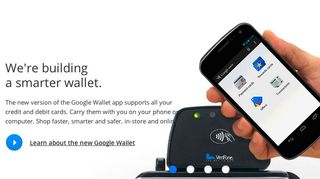 NFC payments are still in their infancy

Don't start chopping up those bank cards just yet – it looks like Google won't be announcing its physical credit card at Google I/O after all.

The "Google Wallet card" has been rumoured for a few months, and its existence was somewhat confirmed when some details were spotted in Google's very own Wallet app.

It was also said to be one of the big reveals at I/O next week, but CEO Larry Page has reportedly killed such plans after a demonstration last week didn't quite go as smoothly as hoped.

Say it ain't so, Larry

Google will, however, bring some new additions to its Wallet service, updating its rewards, offers and loyalty points program.

The lack of support for the NFC payments could be one of Page's concerns as it's a problem limiting the reach of Google Wallet right now.

Of course, Wallet also allows Google to collect more user information, including spending habits, so privacy pundits are likely to be just as concerned about the device.

We've contacted Google to confirm this and will update when we know more.