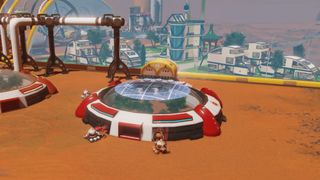 Paradox Interactive has just announced a partnership with Microsoft to create an open modding platform which facilitates the wider availability of mods, initially bringing PC mods to its Xbox One games.

Going by the name of Paradox Mods, the idea is to easily distribute custom user-created content across multiple platforms. For the launch, Paradox is kicking things off by bringing the Mods project to its strategy title Surviving Mars, offering a bunch of carefully picked mods (99 of them at the time of writing) from big-name creators in the game’s community.

Paradox enthused: “With Paradox Mods, mod creators can easily share their work with players on Xbox One and PC (using GoG or the Paradox Launcher) with a single upload. While Surviving Mars is the first to utilize Paradox Mods, support for other Paradox titles is planned to come later this year.”

It’s a win-win situation for everyone, really, as PC modders get to tout their wares to a larger audience, namely Xbox players, while equally, those console gamers get access to hefty dollops of additional content for their favorite titles.

As to what future Paradox games may be supported for Xbox addicts, that isn’t clear yet, although Stellaris (the console edition of the space strategy epic is launching imminently) could be a fair bet, as that’s listed on the Paradox Mods site – plus there are also mods present for Cities: Skylines on the Xbox One.

Note that the update for Surviving Mars which adds Paradox Mods functionality also brings mouse and keyboard support to the Xbox One, a pretty nifty extra.