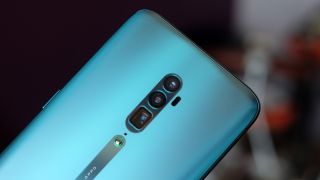 The difference between optical and digital zoom is important to know when shopping for a new phone. It’s not the only tech category where these two kinds of camera zoom pop up, but they butt heads here like nowhere else.

Want the one sentence version? Optical zoom uses magnifying lenses to get you a much closer-up view of a scene than you’d see with your eyes. Digital zoom relies on software to get a similar effect. In almost all situations optical zooming is superior, but let’s look a little closer to find out why.

Optical zoom in phones is completely different to that used by dedicated cameras. Standalone DSLRs, mirrorless cameras and compacts use a series of lens elements that move back and forwards in the barrel of a lens to provide a smooth tradition of focal lengths from its minimum its max.

You can think of these lens elements as a series of magnifying glasses, and the camera sensor behind them as your eyeball (although, of course, our own eyes have a lens too).

Phones use completely separate cameras for their different focal lengths. While phone cameras also have multiple lens elements inside their 'lens', they don't move about.

If a phone has, for example a 'normal', 0.6x ultra-wide and 5x zoom view, each has its own lens and sensor. Only the software and processor are shared.

You only have to look back to the Samsung Galaxy S4 Zoom to realize why this style is used. That phone-like camera had a traditional optical zoom, but was much thicker than other Androids around at the time. There's not much demand for inch-thick phones.

Zoom phones effectively have two or three 'prime' (non-zoom in the traditional sense) lenses with two or three different sensors. That may seem quite an expensive way to get different views of a scene. But it also raises the question of how legit the term 'lossless' is when used about these zoom cameras.

Phone makers sometimes use this term when talking about optical zoom. It tells you "crop 'n' enlarge" digital zoom techniques aren't used. But it is potentially misleading.

You need to remember the quality of the photos depends entirely on the quality of the lenses and sensors uses by your zoom camera. You could argue there's a suggestion in 'lossless' that zoomed photos will be of the same quality as your non-zoom ones. This is never really the case.

Most phones with zooms use lower-quality cameras in their 2x/3x/5x zooms. It's one of the main ways higher-end phones plough ahead on camera quality. They tend to have ultra-wide and zoom cameras that don’t scrimp so much on lens and sensor quality, and they may also have more pronounced zooms.

The Oppo Reno 10x Zoom and Huawei P30 Pro currently have some of the best zoom lenses in town.

Digital zooming is used when either your phone does not have a zoom lens/camera, or you try to zoom-in beyond the capabilities of that camera.

The classic description of digital zoom is that you crop into an image and then blow up that cropped segment so it’s the same size as a non-zoom image. There’s no extra detail in the source, which is why digital zoom photos tend to look blurry.

Things get more complicated here once more. The quality of digital zoom depends on several factors.

At the lowest end, phones simply crop into the image you’d see when snapping a standard shot, expand the result to the same resolution as the initial image and blur things slightly to hide the craggy edges.

Smarter processing used by higher-end phones will interpolate the missing information. This is where an image processor looks at the pixels in the raw cropped image and tries to work out the detail that might be 'seen' by a higher-end camera sensor. As machine learning and imaging 'artificial intelligence' improve, so will this interpolation.

For example, if the camera can recognize the object of texture it needs to render, it’s more likely to create convincing 'made up' detail. It’s particularly true for tight-knit textures like glass and foliage.

Right now you won’t see a huge amount of this kind of these smarts in phones. Google is the leader in this field, largely because it’s the one phone-maker that has stuck to putting just the phone camera on the back of its phones.

Google takes digital zoom a step further in the Google Pixel 3 series phones too. Zoomed images are made using a composite of multiple images shot, as the optical image stabilization motor moves the camera slightly during capture.

It’s used to emulate the data that would be captured by a higher-resolution sensor, as that movement is so slight it captures detail between the 'real' pixels.

Now that is what we call clever. Google calls this Super Res Zoom (and you can learn more about it in the video below).

In our experience this doesn’t compete with the best optical zoom phones, but it does perform better than a few of the lower-end ones.

And what about hybrid zoom? This is a term phone makers are more-or-less forced to used when describing zoomed photos that exceed, or are between, the local lengths of the actual lenses.

At times this simply means digital zoom is used to, say, take a 10x image with a 5x lens. And much like digital zoom, this may entail a simple smoothing filter or more intelligent interpolation algorithm.

Some other phones also use the information from other cameras to help out. For example, if a phone has an 8MP 2x 'optical' zoom and a 48-megapixel primary camera, it may use the image data from both to create the final photo.

There are interesting advancements on both sides, though. Phones like the Huawei P30 Pro and Oppo Reno 10X Zoom have a 'periscope' zoom. This is where a mirror bounces light off at an angle before it reaches the lens, making it possible to fit a more pronounced zoom into a thin phone.

And if you want to read more on the innovations Google puts into its Super Res Zoom feature, there’s a great blog post on the subject on its AI Blog.