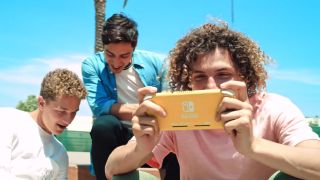 The Nintendo Switch Lite is set to offer a streamlined version of the Switch console we all know and love: the same games, near-identical inputs, and with some choice features stripped out for a more compact and affordable way into the Nintendo ecosystem. And one thing the Switch Lite has decided to cut? Virtual reality.

The Nintendo Labo VR Kit was a surprise addition to the Labo range this year, allowing users to turn their Switch console into a bonafide VR display they could strap to their heads.

But the new form factor of the Switch Lite – measuring a more compact 5.5-inch screen, and integrating the Joy-Con controls into the body of the console itself – means it won't quite play nice with the Labo VR Goggles you might have been eyeing up, which require the Switch's larger build and 6.2-inch screen.

The appeal of the Switch Lite will be in its focus on a handheld experience. As a smaller and more portable console, without the faff of detachable controllers, it will no doubt prove popular among Nintendo gamers. But you are having to sacrifice some of the console's expanded functionality and accessories.

There's no TV output for a start, which means you can't attach it to an existing Switch dock and expect to see your games on the big screen.

That also means the console isn't really appropriate for use with any of the Nintendo Labo peripherals, such as the Labo Vehicle Kit or Labo Variety Kit. You could technically use the Switch Lite's small screen – connecting with external Toy-Cons like the robot suit or fishing rod, for example – but when your controller is larger than your display, you know something's not right.

The move towards cheaper hardware and less functionality could be a worrying one for the future of Labo, as well as Nintendo's experimentation with VR. Some people won't miss HD Rumble or VR capability, but the features form part of a wider hardware innovation that may get lost by the wayside with the rise of platform-agnostic gaming services such as Google Stadia.

But with Nintendo's main competitors fighting for higher performance specs with the Xbox Scarlett and PS5, and a rumored Switch Pro model possibly on the way, we're hoping the kinds of gaming experiences currently possible will continue to grow and change with its user base.