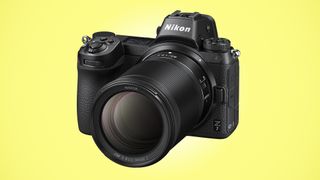 Just a day after it seemed Nikon was readying its much-coveted – but still not actually available – NIKKOR Z 58mm f/0.95 S Noct for release, the company has confirmed that another of its promised lenses will be with us shortly.

The Nikon NIKKOR Z 85mm f/1.8 S is the longest prime lens for the Z mount so far, and one of four fresh lenses that have been promised before the end of the year.

Nikon makes some grand clams for its new lens, including exceptional sharpness to the corners of the frame at even its widest f/1.8 aperture. This has been achieved through a fresh optical design that sees 12 elements arranged over eight groups, with two extra-low dispersion elements to combat chromatic aberration and Nano Crystal Coat technology to help banish flare and ghosting.

Also helping to control flare and ghosting is a round hood that ships with the lens as standard, while nine-diaphragm blades inside the lens should ensure that bokeh is nice and smooth.

And while there's no image stabilization inside the lens, users of the current Nikon Z6 and Z7 already have this in their camera bodies, which should make shooting with the lens at slow shutter speeds possible.

Much like the other two prime lenses in the line, the NIKKOR Z 85mm f/1.8 S has a streamlined, minimal design, with a deep control ring that can be customized to perform manual focus, aperture adjustment or other tasks, together with a switch that flicks between autofocus and manual modes. The body also has a dust and drip-proof design to keep its insides protected.

While the lens will be a natural choice for portraiture, Nikon is also keen to highlight its suitability for video work, with an ultra-quiet focus motor and minimized focus breathing, along with its de-clicked control ring for the adjustment of key settings during video recording.

Right now, the lens is only compatible with the Z6 and Z7 models that were announced last year, although Nikon is rumored to be working on both entry-level and pro-grade bodies to expand its Z-series lineup.