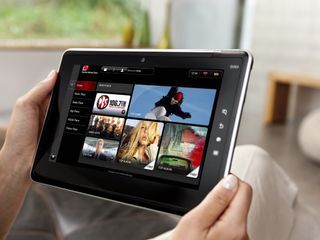 Toshiba has released its Folio 100 tablet PC this week, the latest Android based pretender to the Apple iPad's throne.

The iPad currently owns around 95 per cent of the tablet PC market, although this is likely to change considerably as more Android tablets arrive in the coming months.

Toshiba's Folio 100 device claims to offer users "a rich entertainment experience and gives access to a wide selection of apps and download services via Toshiba Market Place," according to the company's press release.

Toshiba is also keen to promote the fact that the Folio 100 features a "broad range of connectivity options" as well as support for Adobe Flash 10.1 – neither of which Apple currently offers on its iPad.

Apps can be downloaded onto the Folio 100 via the Toshiba Market Place, with a few hundred apps already available organised in categories such as communications, games, travel & maps, business & finance, e-books, utilities and more.

Tosh hopes to encourage software developers to support the platform – at www.toshibatouch.eu – offering all the tools devs need with an "attractive revenue share model [that] allows developers to participate with up to 70 per cent of the revenue of their app."

Toshiba's Music Place is also available, powered by 7Digital, offering "an easy to use client that gives access to one of the widest catalogues of music" which you can download to the local 16GB hard drive or store in a personal cloud storage area.

Specs wise, the CPU is an Nvidia Tegra 2, the screen is a 10.1-inch 1024x600 capacitive multi-touch display, with a 'highly intuitive graphical interface' that runs on top of Android 2.2.

Toshiba claims that battery life is around 7 hours ( based on 65 per cent web browsing, 10 per cent video playback and 25 per cent standby). Pricing and availability details to follow shortly.