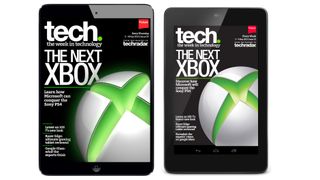 Fresh from becoming a multi-platform maestro, the latest issue of tech. magazine has landed and has everything you need to know about the next Xbox inside.

Microsoft has put us all out of our misery and announced that the next Xbox will be revealed 21 May. With this in mind issue 23 of tech. magazine has all that we know about the upcoming Xbox so far, with all the expert comment you need to decide whether it will be the next-gen console king.

Just in case it ends up being something of a letdown, we also showcase the worst gaming failures – Gizmondo, anyone?

Elsewhere, the magazine has all the information on 4DX, the new technology Japan has embraced for Iron Man 3.

There's also a look at LG's curved OLED screens, the experts' views on Google Glass and an insight into what is happening with iOS 7.

Plus, we have in-depth reviews of the Razer Edge gaming tablet and the Nokia 720, and it's Instapaper v Pocket in the battle of read it later apps.

And if that wasn't enough, tech. has compiled the funniest and most vitriolic comments about iTunes turning 10 and also points you to the best reads around.

Out every week, tech. is a digital-only magazine from the makers of TechRadar, which is now available for the iPad through Newsstand, Android tablets and smartphones through Google Magazines – where it is the world's first digital-only mag on the platform – and you will also find it on Zinio.