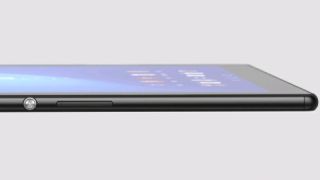 The Xperia Z4 Tablet gets leaked... by Sony

Sony is preparing to unveil the Xperia Z4 Tablet at MWC 2015, and even though it's due to start on March 3 it looks like Sony has accidentally let slip an image of it. Whoops.

The image was posted – and then hastily retracted – on the official Xperia Lounge app, which brings the latest Sony news to Xperia device owners. This time it appears to have jumped the gun ever so slightly.

The image shows an impressively thin design that looks familiar to the Xperia Z3 Tablet Compact, which Sony describes as "lightweight" and "premium".

The text that accompanies the image states that the Xperia Z4 Tablet will have a "stunning 2K display", though it doesn't state how large the display will be. As there's no mention of "compact" anywhere, we'd guess that the screen will at least be bigger than the Xperia Z3 Tablet Compact's 8-inches.

Sony also mentions that the Xperia Z4 Tablet will have the "latest ultra fast processor" and "industry leading battery performance" which could hint at the tablet containing the Snapdragon 810 SoC.

Although Sony was quick to take down the post, it didn't act fast enough to stop the information going out.

As the post includes the date March 3 2015, which is the start of MWC, we shouldn't have too long to wait to get a better look at the Xperia Z4 Tablet, and hopefully Sony will still have a few surprises for us.