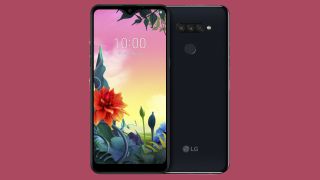 LG just announced two new mid-range handsets, as part of its K range, and each has its share of high-end features. They're dubbed the LG K50S and LG K40S.

That makes it a true phablet, and the device also has a triple-lens rear camera, consisting of a 13MP main lens, a 5MP super-wide lens, and a 2MP depth sensor.

The phone additionally has a 13MP front-facing camera, a hefty 4,000mAh battery, an unnamed octa-core chipset, 3GB of RAM, 32GB of storage, a microSD card slot, and – oddly - MIL-STD-810G standard durability, meaning it should be tougher than most handsets.

The LG K40S is similar but a slight step down. It too has military-grade durability, along with an octa-core chipset, 32GB of storage, a microSD card slot and a 13MP front-facing camera.

Additionally, the LG K40S also has one less rear camera, as it lacks the depth sensor from the LG K50S, but it still gets the 13MP main and 5MP wide-angle snappers.

The two phones both sport a dedicated Google Assistant button, a fingerprint scanner on the back, and DTS:X 3D Surround Sound, so they've got all the features we tend to see in mid-range smartphones.

The devices are due to launch in October in New Aurora Black and New Moroccan Blue shades.

Don’t count on being able to buy them everywhere though, as while they’re coming to Europe, there’s no word on the US or Australia. We also don’t know how much they cost yet, but they’re supposedly ‘attractively-priced’.

We may find out pricing soon though, as the two phones will be on show at IFA 2019 – a tech trade show held from September 6 to 11.