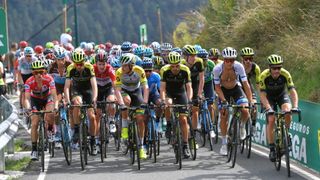 21 stages, 3,254 kilometres and some of the most punishing summit finishes in cycling, La Vuelta a España 2019 is underway with some of the world's top riders competing. At least watching the third and final Grand Tour of the summer cycling race season is really easy - our guide below will take you through the steps (or pedals?) you'll need to watch La Vuelta a España 2019 no matter where you are in the world.

Growing in prestige with each edition - recent winners have included Chris Froome, Vincenzo Nibali, Nairo Quintana, and Alberto Contador - the Vuelta a España is far from the poor relation to the Tour de France or even the Giro d’Italia it once was.

The race this year begins in Alicante on August 24 and continues until September 15 where it will finish in Madrid.

Timings vary but as a rough guide races start around midday local time which is 11am BST, 3am PT, 6am ET and 8pm AEST.

This year's Vuelta is set to be tougher than ever with eight summit finishes - five of which are new to the race, along with two time trials. There's also a detour into Andorra and France as well as a Gran Salida from Utrecht, in the Netherlands.

Boasting Primoz Roglic and Steven Kruijswijk and a strong support squad, Jumbo-Visma look like the team to beat during this year's race with its two main riders likely to battle it out as overall winner. There's also likely to be plenty drama among the ranks of Team Movistar, with Richard Carapaz out for more glory following his triumph in the Giro, starting alongside former Vuelta winners Nairo Quintana and Alejandro Valverde.

You can watch live all the action from the Mediterranean Coast to the peaks of the Pyrenees using our live streaming guide to the 2019 La Vuelta a España below.

Live stream La Vuelta a España from outside your country

We have details of all the UK, US, Canada, Australia and New Zealand broadcasters further down this guide. Good news in Australia where it's on free-to-air TV.

If you're obsessed by watching the cycling and refuse to miss a stage - even when you're away on business or on holiday - then you'll be disappointed to see your domestic coverage geo-blocked when you try to stream online from abroad. That's where utilising a VPN (Virtual Private Network) really helps. It let's you virtually change the ISP of your laptop, tablet or mobile to one that's back in your home country. Thus letting you watch as if you were back there.

They're surprisingly easy to use and have the double benefit of giving you an extra layer of security as you surf the web. There are lots of options, and we've tested loads of them - our #1 pick is ExpressVPN due to its speed, security and sheer simplicity to use. We also love that it can be used on so many operating systems and devices (e.g. iOS, Android, Smart TVs, Fire TV Stick, Roku, games consoles, etc).

Sign up for ExpressVPN now and enjoy a 49% discount and 3 months FREE with an annual subscription. Or give it a try with its 30-day money back guarantee.

Or read more with our pick of the best VPN services out there today.

All the action from La Vuelta a España is set to streamed via Spain's own free-to-air RTVE network on its dedicated Teledeporte sports channel. The TV channel itself can be viewed via apps like TruTV so you can enjoy all the cycling action from anywhere on your mobile smart device. The commentary will be in Spanish, but you'll still have the pictures at least.

Aussie cycling fans can watch the action with English commentary for free thanks to SBS. The free-to-air broadcaster has the rights to show the Vuelta live on its Viceland channel. Don't worry if you're out of the country and want to catch that SBS broadcast - a VPN will let you watch as if you were back at home on your laptop, mobile or other TV streaming device.

How to watch the La Vuelta a España: UK live stream

For UK residents, Eurosport 1 is the channel to head to for your La Vuelta fix. Eurosport is available with basic Sky TV packages or with a Eurosport Player monthly or annual pass - a free trial for which is available here - that also gives you access across loads of devices.

Not in the UK? Don't worry, you can download and use a VPN to take your laptop or mobile virtually back to the UK and watch as if back in blighty.

If you haven't got Eurosport and aren't bothered about watching events unfold live, you can always fall back on ITV's highlights which will be broadcast nightly.

How to watch the La Vuelta a España: US live stream

The La Vuelta a España 2019 is being aired by NBC Sports Live Extra in the US. This will be streamed online so if you have the app then you can enjoy it anywhere. However for those that don't have access to this stream there are other options.

For the most extensive coverage NBC has to offer, you can subscribe to NBC Sports Gold, which is offering a Cycling Pass for $54.99, delivering live, on-demand and commercial free coverage of the Tour.

There's also the option of streaming the Vuelta live via Fubo.tv with apps for the service available for just about any device that can stream video. If you're new to the service, Fubo.tv are offering a week's free trial. With the Vuelta three weeks long, you'll need to subscribe if you want to watch the race in its entirety on the service - Fubo.tv’s basic package will set you back $54.99 per month.

How to watch the La Vuelta a España: Canada live stream

Canadians will be able to get in on the La Vuelta a España 2019 action via FloBikes which streams online so you can watch from anywhere.

A monthly subscription will cost you $30 while a yearly account will set you back $150 ($12.50 per month), which will give you access to coverage of major cycling events throughout the year.

Not in Canada to catch that Flobikes stream? Well you know the answer by now...using a VPN is the way to make sure you don't miss a moment.