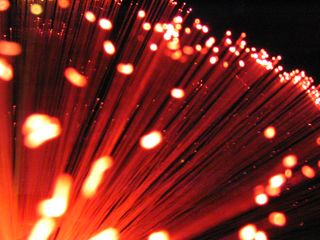 Fibre to the Home (FTTH) is already a reality in the Far East, with speeds of 100Mbps in both directions

On the face of it, broadband internet access is booming in Britain. Some 64 per cent of the population are connected to the web, 88 per cent of these using broadband. That's a lot of people browsing the web at blistering speeds.

Except, they're not. Though we're regularly promised data rates of (up to) 8Mbps, the average UK speed is nearer to 4Mbps, with many experiencing slower downloads. Compare this to South Korea, where 89 per cent of the country is online and a typical customer pays £15 a month for a 37Mbps connection.

Though Local Loop Unbundling (LLU) has sped up the march of technology, it has brought its own problems. When you get ADSL installed, you're dealing with three separate entities; your ISP, BT itself and BT Openreach. That's why it takes two weeks to get a new connection activated and why it's difficult to get faulty connections fixed. If broadband in the UK is to reach its potential, then communication between BT and its partners needs to be streamlined.
21CN and ADSL2+

BT has a 'next generation' access plan dubbed 21CN, a £10billion upgrade to the network due to complete in 2010. The phone system will be switched over to an IP-based network - a sort of wide area intranet. Work has already begun and we'll see the first fruits in 2008 when BT rolls out ADSL2+ services offering up to 24Mbps download speeds.

The thing is, by that time ADSL2+ will already be old news. Thanks to LLU, Be Internet and other providers have been offering an ADSL2+ service since 2005 - at prices that already compete with standard 8Mbps broadband.

There are tried, tested and faster alternatives to ADSL2+. VDSL (Very High Speed Digital Subscriber Line) leads the pack. Deutsche Telecom in Germany offers VDSL services in 28 cities, with speeds up to 50Mbps.

VDSL requires a physical network that mixes traditional copper wiring with FTTC - fibre optic cabling to the 'cabinet' (those green boxes you see in the street). The 21CN program lays fibre where new cable is required, but BT has no current plan to upgrade the whole network.

Fibre to the Home

If cable to the cabinet is fast, just imagine how swift a fibre optic link direct to your home would be. For customers in Korea, Japan and Taiwan, Fibre to the Home (FTTH) is a reality, with speeds of 100Mbps in both directions. FTTH isn't part of BT's current 21CN upgrade either. Though BT has committed to a limited 10Mbps pilot in 2008 - and is installing fibre optic cable to new building developments - wider deployment is several years away.

Virgin Media dominates cable internet provision in the UK. Half the country is cable ready right now and Virgin Broadband is the UK's second largest broadband provider. That makes the recent announcement that it intends to launch a fully tested 50Mbps cable service in 2008 very interesting.

Come the end of 2008, half the country will be able to access high speed internet services many times faster than they currently enjoy. The other half will be stuck with BT's slow upgrade programme. Isn't it time our national telecoms company began catching up with the rest of the world?

We're not the only ones who think so. Stephen Timms, the UK government Minister for Competitiveness, recently told a gathering of broadband leaders: "If we delay in putting a new, ultra-fast network in place, it could be a barrier to the future success of our economy".

Mr Timms can be contacted through www.stephentimms.org.uk - or why not add your name to one of the petitions on petitions.pm.gov .uk? Search for 'broadband' and you'll find a number of campaigns just begging for your support.