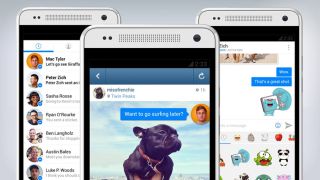 Ever since Facebook spun Messenger out as its own separate app, Mark Zuckerberg and his team have been pushing the idea of Messenger as a platform - not just a place to chat with (or ignore) friends, but somewhere you can run apps, do your shopping, send payments and more besides.

According to reports over the weekend, gaming is going to be the next big step forward for Messenger, with some of the major studios (like Candy Crush maker King) said to be prepping titles for an imminent launch. "Instant Games" is the name of the new feature, say sources speaking to The Information.

It's no secret that Facebook wants to bring games to Messenger - we've already seen some basic efforts made by Facebook appear, and if you know the right tricks you can already launch mini football, basketball and chess games inside the chat app.

It's only a game

This new roll-out seems to be on a whole new level though, and marks a fresh attempt by Facebook to get you to stay inside its own walled garden rather than drifting away to those other app and game stores owned by the likes of Google and Apple.

In an ideal world, Mark Zuckerberg would want you to only have to install Facebook and Messenger on your phone - and putting games inside Messenger would be part of that. You'd be able to challenge your friends directly inside the app and Facebook could potentially take a cut of in-game purchases.

The insider sources say a development kit is arriving later this month so watch this space for an official announcement - and watch your Messenger app for a new invasion of mini games and challenges from your Facebook friends.