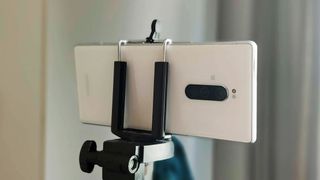 One of the biggest hurdles for budding filmmakers is getting decent gear. A decent film camera, like the Sony Alpha A7S II, can cost a four-digit price, then you’ve got to buy or rent tripods, lights, light stands, boom or lapel mics, field recorders, and much, much more – in short, filming can be inaccessible for those with limited funds.

One of the key selling points of the Sony Xperia 1 is the Cinema Pro app. This app, which comes loaded on the phones, recreates the experience of a Sony Alpha camera, with a similar interface and technology. It lets you record high-end-quality video on your not-as-high-end smartphone, making film recording accessible and easy.

At least, that was Sony’s pitch, and it was certainly a good one, as the smartphone (and app) have proven quite popular. Indeed, in our own review, based on some hands-on time with the phone and our experiments with the Cinema Pro app, we praised the ease of the app.

However proper budding film-makers aren’t going to simply film some bushes and rocks, as we did for our review; they’re going to be using the phone to film proper projects, with multiple scenes, in different locations, and shooting different shots.

So as a budding film-maker myself, I decided to use the Sony Xperia 1 to film an entire short film, just to see if it could be done.

The short film was based on a poem by a friend, and the footage would be B-roll style material to play over the top. That way the cinematography wouldn’t need to be too wild or experimental, as it can often be a little confusing shooting with a new camera – especially if that camera is a long, fragile smartphone.

The kit I used to shoot with included two soft lights on tripods, and a smartphone-specific tripod to hold the Xperia 1 for static shots. I also did some handheld shooting, and you can be sure we’ll get into that later.

As a final point, I actually wrote and followed my shot list on the phone itself, instead of having it as a separate form – this made it super easy to quickly find what shot to set up next, and how I had envisaged each scene, as instead of digging through a stack of papers I could easily switch apps to Google Sheets.

Once I had my shot list, and kit prepared, and the Sony Xperia 1 charged, with plenty of memory spare, I was ready to film.

Setting up on a Sony Xperia 1

The first shot I needed from the Sony Xperia 1 was a static shot of someone sitting in bed – easy enough. I set up the phone tripod at the end of the bed, with the two soft lights behind it, and got ready to film.

Or, at least, I tried to get ready to film. You see, my tripod used a grip to hold the smartphone in place – which was conveniently position so that when it gripped the phone tight, it pressed the power button, turning off the phone. Eventually I managed to angle the clasp so it sat between the volume rocker and power button, but the phone was decidedly lop-sided when I did.

No matter, after a while of tinkering and angling the (admittedly rather cheap) tripod, I was ready to film again. Note to prospective Xperia 1 film-makers: don’t cheap out on your tripod!

Now it was time to find the ‘look’ of my film – I needed to choose which lens to use, as well as white balance, ISO, framerate, resolution and more. Thanks to the Cinema Pro app this was easy, and I could see the effects of each choice immediately on the master display – it’s not like with actual film cameras, in which I’d need to unscrew the screw in different lenses to test them. This made it super easy to optimize settings for each shot.

The different options also helped me learn more about the effect of changing certain options, like the color grade or white balance, as often these are the kind of things you only think about when editing.

Filming on a Sony Xperia 1

When I filmed the rest of the short on the Xperia 1, I stopped viewing the device as a smartphone, and considered it more like a camera-lite. That sentence makes my opinion seem a little ambiguous, but it’s safe to say, that’s it’s a huge compliment.

The portability of the mobile device also meant moving shots were much easier to film, as the lightweight device took no effort to lift or move.

That said, not all my handheld shots are particularly stable, and I feel like the image stabilization could have been a little better to balance the natural shake and sway of human hands. In some of my footage, you can see a bit of sway that made footage look a bit too disconcerting to use, particularly in panning or tracking shots.

If we’re on the topic of things I found a little bit annoying – most cameras have movable screens, so you don’t have to be facing the device straight-on to see what you’re filming. This isn’t the case for the Xperia 1, so shots at weird angles are a little challenging.

At one point I tried to film an object dropping on the floor, from a floor-level perspective. It was impossible to see what I was filming, in order to line up a shot, and I didn’t manage to capture a useable video of this particular shot.

One final, minor nuisance? Auto-focus was great, but it was a little fiddly trying to work manual focus while also holding the Xperia 1 straight, and it took many takes to get this to look good.

But back to the positives – the screen-grab mode let me take a still of what the phone was pointed at, so I could show the actor, and we could work on their performance. Not all video cameras can do this, but it was really useful to be able to do so, and saved a lot of time when I’d otherwise have to describe what I wanted in greater detail.

I also want to sing the praises of the Cinema Pro app – it loaded up quickly whenever I closed it to bring up the shot list, the interface was easy to work my way around, and since it sent videos straight to the phone’s main gallery, I knew where to go to replay old footage.

But the Sony Xperia 1 is still a phone!

While filming, I started to view the Sony Xperia 1 as a camera, and forgot it was just a smartphone (thank you, airplane mode) – and by that I mean, I forgot that it had a battery that could run out quickly if I tried to film a lot. And it did.

After only a few hours of filming, the battery was sub-30%, and the phone had long past the ‘worryingly warm’ stage. Of course, it’s nice to have an excuse to take a lunch break, but the battery and heat limitations are something you don’t get on a standard video camera, and depending on the shoot, (especially if you’re in a remote location) frequent recharging isn’t always possible.

Luckily, I was filming in my flat, so I could easily plug it in to charge when I needed. But you don’t always want to film in an interior with easy access to plug sockets, so you’re going to need to find the best power bank you can if you’re filming outdoors.

Memory was less of an issue, though, as the Sony Xperia 1’s 128GB was enough. After two days of filming (one day for the main project, a second, half day for practicing and some B-roll) I had just under 80GB of film files, and despite all the apps, pictures and files I had on the phone already, I didn’t come close to the storage limit.

So how did the film turn out?

One major disadvantage the Sony Xperia 1 has over its camera competitors is that, in video cameras, it’s easy to take the memory card, insert it into your computer, and have all the files ready to edit in minutes (well, many minutes, but still).

However, for the Xperia 1, the files were too big to transfer them over the web, so I had to plug the handset into my computer. Remember when people used to do that? I barely do. It took nearly eight hours to get all the files through – which wasn’t exactly ideal.

I had to do this because, while the Xperia 1 has its Cinema Pro app for shooting footage, it has no app for editing footage, and I didn’t want to ruin the 21:9 experience by downloading a third-party app, so using a PC video editor was the only way.

I should point out right now that, while I have all the footage, I haven't started editing yet. People who have edited films know why; it takes a long time, and by the time I've finished, it's likely the Xperia 100 will alerady be out.

Would I recommend the Sony Xperia 1 to film a short film on?

Learning to film with cameras is quite a steep learning curve, and it’s also rather expensive – the Sony Xperia 1 and its Camera Pro app solve these problems, and I found the experience of filming on the smartphone incredibly easy and relatively painless.

Of course, I only tested with a film that was all indoors, with a relatively simple selection of shots, and enough gear to see me through, so in other contexts, and for other shoots, people may have a different experience.

But for budding film-makers, people who don’t want to carry loads of camera equipment around with them, or just people who think phones are the future, I’d wholeheartedly recommend the Sony Xperia 1 as an easy alternative to cameras for creating a short film.