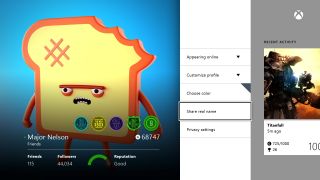 Get ready to stop having to delete game installs for the sake of storage and having to look up who's who on your Xbox Live friends list as June's Xbox One update solves these problems and more.

The forthcoming update includes the ability to use up to two external storage devices, share your real name with your Xbox Live buddies and use SmartGlass more seamlessly.

Next-gen gamers will also be pleased to hear about the return of the much-requested Xbox One auto sign-in feature that was available on the Xbox 360.

"Since our launch of Xbox One last year, we've been hard at work to continue making Xbox One the best destination for all your gaming and entertainment experiences," wrote Xbox Live's Major Nelson on his blog.

"Because of the way we've designed the Xbox One platform, we've been able to continually improve the product for you with a more regular cadence of system and app updates."

The feature leading the charge is the ability to have not one but two external hard drives hooked up to your Xbox One. The only requirements are that the external drives have a USB 3.0 port and a minimum 256GB of space available.

Once the console formats the drive, any games and software you choose to download will default to the external first and then any overflow will spill onto the console itself. By moving installed apps to your external hard drive you'll be able to take them with you to, say, a friend's house or anywhere you'll have access to another Xbox One.

Two additional drives should mean plenty of extra room for those sweet free Games with Gold titles that come out every month.

It's for friends but don't call it Friendster

By choosing to take advantage of Xbox's real name sharing program, you'll finally be able to tell which one of your coworkers is B00MxH34DSH0T and which one is L4D13SMAN300.

But if your privacy meter is set on "outgoing," Microsoft will allow a discovery option that will show you friends of friends real name. Microsoft has firmly stated that your followers, however, will only see your tag and not your real name, avoiding any potential privacy concerns.

The video also details how you'll be able to use SmartGlass to rearrange pins, bring up OneGuide directly on your phone or tablet, and use streaming apps like Netflix and Hulu without an Xbox Live Gold subscription.

It's nice to see Microsoft working hard on the constant usability updates, especially ones of that fulfill the original promises Microsoft touted at E3 last year.

We'll surely see more Xbox One announcements at E3 2014 as Microsoft attempts to rival PS4 now that the two systems are at the same price point.

Check out our Xbox One video review below: