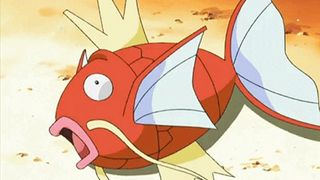 Worst Pokemon in the original games

And while some of us have been right there since the beginning, capturing each new set of loveable (and sometimes awful) companions year after year, game after game, some of us are just now finding a re-inspired vigor for monster wrangling thanks to Pokemon Go.

We've written extensively about the mobile game that's seemingly taken over the internet – from how to download the game, to the best tips and tricks and even how to fix it when it inevitably crashes. (And trust me, it crashes all the time.)

So to close out the third week after the game's launch, we've decided to do something a little different to show the game that inspired a generation to become the very best like no one ever was a little love: we've rounded up the most poorly designed monsters of Generation 1.

Yes, the first generation is certainly still the best – there's no doubt in anyone's mind there – but by no means does that mean it was perfect. From a bat that literally seems to inhabit every inch of every cave in the entire world to a pedophilic mime, there's a few creatures that probably should've gotten the axe before the game blew up in '96.

Here's our list of the 10 worst, followed by a brief (satirical) explanation of why they were picked:

Lickitung: Here's how the development meeting for Lickitung went down. Person A: "Hey, you know what's weird? Tongues." Person B: "Oh man, tongues are weird." Person A: "We should make a Pokemon that's just a tongue." Person B: "Wow, that's genius. You really nailed this one, Jim." (OK, there probably wasn't anyone at Game Freak named Jim, but you get the idea.)

Mr. Mime: Let's be honest, all the psychic Pokemon from the first generation are a bit strange. There's a narcoleptic fox thing, a yellow bear that eats dreams and what can only be described as a racist stereotype that somehow developed ice powers. But the worst of them all is Mr. Mime, a creepy, pedophilic mime who has zero muscle mass and bulbous red masses everywhere on his body. (Seriously, he should get that checked out.)

Rattata: Guys, Rattata is a rat. Like, it's just a regular rat. While Game Freak gave all the other creatures special powers – there's a duck that knows how to move objects with his mind – Rattata is just a plain ol' rat that evolves into a slightly larger rat. Its special moves include whipping its tail, tackling, tackling quickly, biting and biting harder. That's just bullshit.

Metapod and/or Kakuna: When it comes to poorly designed monsters, you'd think it'd be harder to come up with an idea worse than a common rat, and yet, Game Freak found a way. Metapod and Kakuna, the two middle stages between a larva and its winged evolution, know how to do two things: shoot string and become more cocoon like. In a world where there are Pokemon pumping water out of cannons on their backs, legitimate dragons and bulls that run around causing earthquakes, these two Pokemon spray silly string. Talk about getting shafted.

Magikarp: While some of these Pokemon never improve their standing in life even after evolution (see: Rattata), at least Magikarp evolves into a badass sea monster. But, for the first few years of its life, Magikarp is just a regular fish. It knows how to run into other fish and it knows how to splash around. That's it. It's like, "I live in an ocean with all these other fish that can spray water from their mouths and cause tidal waves. Maybe I should learn how to do that, too. On second thought, nah, I'm good. I'm cool just being a regular crappy fish."

Exeggcute: Exeggcute is a riddle wrapped in a mystery, inside an enigma encased in a terrible idea. It's a group of sentient eggs – that have no association to a bird, mind you – that bounce from one place to another without breaking. Well, scratch that, one is broken. So there's, like, a group of five eggs and one rotten broken egg trailing behind them just meandering around the jungle that, at some point, evolve into a tree for some completely unknown reason. Take that, nature, Pokemon doesn't need your damn rules!

Ditto: I like to think that Ditto is Pokemon developer Game Freak's Icarus moment; clearly it had flown too close to the sun and got burned. Here they are, 130 Pokemon deep and they're running out of ideas. And then, out of nowhere, someone's like, "We have all these great monsters – especially Rattata, which I think we can safely say was our best idea ever – so why don't we just make a Pokemon that makes a copy of all these amazing Pokemon?" And then everyone applauds and promptly leaves the room, leaving one lonely intern to come up with the design. And that, my friends, was how Ditto was created.* (This story is probably 94% false.)

Grimer: There was a lot of contention for the #8 spot on the list. Some people insisted that Voltorb and Electrode should get it for being the laziest designed Pokemon ever. Others said that it should go to Meowth for having money glued on its face. Both of those, while still valid arguments, pale in comparison to Grimer, a Pokemon that is literally sewage. Wait, but it probably evolves into something cool, right? Nope, just a larger pile of sewage.

Tentacool: Tentacool – or as I have designated it, "The Zubat of the Sea" – isn't a poorly designed Pokemon. It's actually sort of neat. It's like this poisonous, misanthropic jellyfish that just doesn't give a shit about this world and what's happening in it. The only thing Tentacool does care about, however, is stopping you every 10 seconds for a battle while you're trying to surf from one town to another. It's annoying, but thankfully there's only, like, one time you ever need to use surf to travel from one spot to another.

Zubat: This list was over before it started. From the original games back in the '90s to Pokemon Go today, Zubat has been a pox upon the world of Pokemon. On some level, I get it. Every game needs a heel. Mario has Bowser. Donkey Kong has King K. Rool. Little Mac has four-time heavyweight champion of the world Mike Tyson. Every game needs someone or something to hate. But Game Freak outdid themselves with Zubat, a creature that just shrieks at you and will not LEAVE YOU ALONE FOR TWO MINUTES WHILE YOU WALK THROUGH A PITCH BLACK CAVE WITHOUT A LIGHT SOURCE FIGHTING MOUNTAIN MEN WHO CAMP THERE FOR SOME ODD REASON.

Which Pokemon do you think is the worst of the worst? Let us know in the poll below!