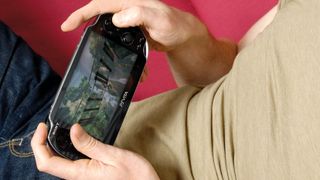 The PS Vita is not as uncomfortable as it looks

Sony's PlayStation Plus service, which offers games and other benefits to those willing to pay subscription fees, will finally debut on the PS Vita next Monday, Nov. 19 (Nov. 21 in Europe).

The service became available to PS3 users in 2010, and Sony announced at the 2012 Tokyo Game Show in September that PS Vita gamers would soon get to try it out as well.

PlayStation Plus subscriptions are available in two flavors: three months for $17.99, or one year of service for $49.99.

The service is a tough sell, since online multiplayer gameplay is provided for free on Sony's gaming platforms (unlike on Microsoft's Xbox 360), but it does come with several perks.

The perks of PlayStation Plus

First and foremost, PlayStation Plus subscribers have access to an ever-expanding library of downloadable games.

Sony adds new games to the PS Plus package every month, and subscribers have unlimited access to those titles until they cancel their subscriptions.

PlayStation Plus for PS Vita will become available when the portable system's firmware is updated to version 2.0 on Monday, and on Tuesday Sony's next PlayStation Store update will add five downloadable PS Vita games and one PSP game for PS Plus subscribers.

That last one, by the way, was originally scheduled to be released on Oct. 16, but was delayed for unknown reasons. This announcement is the first that's been heard of the game since then.

Sony announced the impending arrival of PlayStation Plus for PS Vita in a PlayStation Blog post written by SCEA's Director of Product Planning and Platform Software Innovation, Don Mesa.

Existing PlayStation Plus subscribers will be able to take advantage of the service on PS Vita without any additional fees or hassle.

Other PlayStation Plus perks include cloud storage for game saves, automatic updates, and PlayStation trophy syncing.

The PS Vita's 2.0 firmware update will bring additional changes to Sony's portable system, including an email app, wireless content transfer between the Vita and a PC, and "enhancements to the web browser," according to Mesa.

"With the addition of PS Plus," he wrote, "and such a great lineup of exclusive games launching by this holiday, now is the perfect time to purchase a PS Vita."