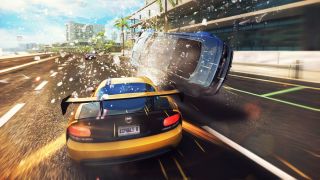 It's that time of year again, where Imagination Technologies announces its plans to make your gaming graphics look even more awesome, and we translate all the numbers and letters to deliver the cold, hard facts.

This year is a big one - Imagination is introducing a new family of GPUs called the Series7XT, consisting of five different variants.

If you want to get really technical, we could tell you about how the new family scales from two clusters to 16 clusters, but we'll just point you in the direction of Imagination's blog and let you read the nitty gritty details yourself.

What we will tell you is what all of this means: Imagination's new GPUs are good news for affordable gaming and potentially bad news for the PS4 and Xbox One.

As Imagination's Alexandru Voica told TechRadar, the new GPUs have the potential "to offer the performance of the current-gen consoles, but at a lower price point."

That will be best achieved through the highest-powered GPU, the PowerVR GT7900, but all of them will make high-end gaming less costly, most notably on Google's Android consoles.

Microconsoles have had a hard time taking off - we can't think of one that's left a truly lasting impression - but Imagination may have just thrown Android gaming a massive lifeline.

"You're seeing a lot of Android microconsoles," said Voica. "This is something that would fit perfectly into that market".

This is also a big leap forward for smartphone and tablet gaming, which will benefit hugely from the graphical improvements in much the same way, although performance will sit more around the level of the Xbox 360 and PS3.

However, features such as full hardware support for tessellation and superior texture compression format will now be part of the package. Imagination's PowerVr graphics processors are a big part of Apple's iPhones, so this potentially means a significant graphical leap in the iPhone 7, if not the iPhone 6S.

The awesome features don't stop there; this is now the only family of mobile GPUs on the market that offers virtualisation. This is a feature that allows a device to run multiple operating systems, and could play a significant role with the arrival of Valve's Steam Machines.

Voica told us that it usually takes "between a year and a half to two years" from the moment a partner licences a GPU to when they ship a working product, so don't expect to see chips based on the new GPUs showing up in 2014. However, Voica said we might start seeing the new GPUs early next year.

Still, it's a leap forward that should make Sony and Microsoft realise that they might soon have a lot more to worry about than just each other.