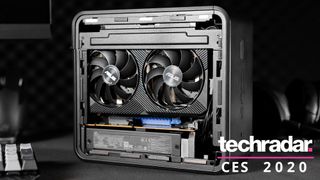 At CES 2020, Intel announced its NUC 9 (also known as Ghost Canyon) range of small-form-factor PCs, and now Asus has revealed that it has created the Dual GeForce RTX 2070 MINI, a graphics card that's specially built for the tiny PC.

Featuring Nvidia's powerful RTX 2070 graphics card, and a choice of either 8GB or overclocked (up to 1,680Mhz) 8GB graphics memory, this GPU will be able to bring some serious gaming firepower to the small NUC 9 Extreme Kit and NUC 9 Pro Kit that Intel is releasing.

Crucially for such small PCs, Asus is promising that the Dual GeForce RTX 2070 MINI will run at around 10 degrees cooler than other RTX 2070 cards designed for Intel's new NUC PCs, with the dual-fan setup keeping it running at around 74C, while still remaining quiet.

According to Asus, the company worked closely with Intel to create a powerful GPU that fits precisely into the NUC 9 Extreme and NUC 9 Pro, with the shroud, heatsink and heat pipe of the GPU positioned to benefit as much as possible from the mesh panel on one side of the the NUC 9's chassis.

As well as offering the power of the RTX 2070 GPU, which is set to go on sale today (January 8), Asus will also release the Dual GeForce RTX 2060 MINI and Dual GeForce GTX 1660 SUPER MINI cards in the first quarter of this year as more affordable options. Pricing for the cards is still to be confirmed.

While these GPUs have been designed for the Intel NUC 9 PCs, they can be used in any PC, so are ideal for people looking to build small console-like gaming PCs to take on the Xbox Series X and PS5 when they release later this year.