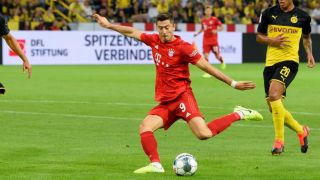 It's not been a good Bundesliga season so far for Bayern Munich, as they rest in fourth in the table and are well and truly in crisis mode. Can second-place Dortmund capitalise on the behind the scenes drama at Der FCB? You can watch all of the action from this crucial clash by following our guide below to getting a Bayern vs Dortmund live stream - no matter where you are in the world.

Bayern Munich vs Borussia Dortmund live stream - where and when

Expectations at Die Bayern are, of course, on a different level to most clubs, and the nature of last weekend's historic 5-1 capitulation to Eintracht Frankfurt required coach Niko Kovac to fall on his sword and resign.

While Bayern might be sightly off the pace in title race, it's unlikely they'll be anyone pointing the finger of blame at Robert Lewandowski. The Polish striker is on a ridiculously good goal-scoring run having score in every Bundesliga and Champions League match this season. Interim coach Hansi Flick will be hoping the talismanic hitman will continue the run against an increasingly improving Dortmund side.

BVB come into the game off the back of a 3-0 win over the previously unbeaten Wolfsburg and a remarkable comeback in midweek to beat Inter Milan 3-2 at home in Europe.

There's an added boost for Dortmund ahead of today's clash, with Marco Reus all set to be fit to play after the skipper missed out on Wednesday's epic.

If you're abroad this weekend but still want to watch coverage of the match from your home broadcaster, you'll need a VPN to do so. That's because your normal coverage will be geo-blocked. It's really easy to do and stops you having to tune in to some dodgy stream you've heard about on Reddit.

A VPN is perfect for this as it allows you to change your IP address so you appear to be in a completely different location. We've tested hundreds of VPNs and can recommend ExpressVPN as the best VPN service currently available.

How to stream Bayern vs Dortmund live in the UK

Footy fans in the UK and Ireland looking for a regular dose of live action from the German top flight will be served once again by BT Sport who have the rights to show key matches as they happen throughout the season.

Saturday's match in on BT Sports 1, with coverage beginning at 5.15pm.

How to watch Bayern Munich vs Borussia Dortmund: US live stream

Fox Sport is the US TV home to the Bundesliga with as many as six live games being shown across a combination of FOX Sports 1, FOX Sports 2, FOX Deportes, FOX Soccer Plus and Univision Deportes each match week.

Saturday's game will broadcast live on Fox Sports 2 along with FOX Soccer Match Pass, FOX Deportes and Foxsports.com, with kick-off at 12.30pm ET and 9.30am PT.

Assuming you have cable, you'll be able to watch on Fox either at home, online or on the network's Fox Go app for tablets and smartphones.

How to watch a Bundesliga live stream in Canada

In Canada, subscription TV channel Sportsnet have the rights to show the Bundesliga, but if you don't have that, you can sign up to Sportsnet for a live HD stream on your computer or mobile device (Wi-Fi signal permitting).

How to live stream Bayern vs Dortmund in Australia

Saturday's clash between Bayern and Dortmund will be on beIN Sports 1 with kick-off at 4.30am AEDT.

To watch Bayern vs Dortmund tune in to beIN Sports 1, with kick-off set for 6.30am NZDT.