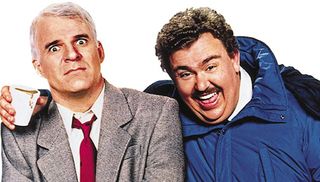 Hollywood’s always had a love affair with Christmas, whether it’s the sing-along of Bing Crosby’s Holiday Inn, the slapstick comedy of Home Alone, the anarchic horror of Gremlins, the peerless action of Die Hard, or the good-will-to-all-men of It’s A Wonderful Life. The movie industry has traditionally been slightly less indulgent when it comes to America’s other big winter holiday, but that doesn’t mean there aren’t plenty of Thanksgiving films worth serving up with the turkey. From road trips to family drama, heists to satire, here are 10 of the best Thanksgiving movies.

The original Rocky kicked off one of the most American of movie franchises, so it’s only fitting that some of its key scenes should hinge on the most American of holidays. This Thanksgiving is anything but conventional – though it does feature turkey. Aspiring boxer Rocky arrives at his friend Paulie’s house, with the intention of asking out Paulie’s sister, Adrian. She’s reluctant but the bullying Paulie tries to strong-arm her by throwing the turkey she’s cooking out the kitchen window. She eventually relents, however, and the subsequent date begins a romance that will span many ludicrous sequels.

After a run of era-defining high school movies, iconic ’80s director John Hughes graduated to adult-focused stories with the quintessential Thanksgiving comedy. Steve Martin plays an uptight advertising exec battling the elements to get back home to his family in Chicago for Thanksgiving, while the late John Candy is the slobby, relentlessly chatty salesman who tags along. The title neatly sums up the trials and tribulations of their epic journey, but the film’s mostly about the verbal sparring between one of comedy cinema’s great double acts.

After decades being hailed as the best actor of a generation, Scent Of A Woman is the movie that finally won Al Pacino his Oscar. He plays Frank Slade, a blind army veteran who spends a Thanksgiving weekend leading a student from a posh private school (Chris O’Donnell) – hired to babysit the older man – astray. It turns out Frank has planned the debauched weekend as a blow-out before he commits suicide, but via tango dancing, a drive in a Ferrari and plenty of male bonding, the duo succeed in making each other better people.

Set at the height of summer, Addams Family Values isn’t technically about Thanksgiving, but the showstopping moment of this superior sequel most definitely is. Instead of being a celebration of America’s most famous meal, however, it’s a hilariously subversive, satirical take on the dark side of Thanksgiving’s origins. Forcibly incarcerated in a hellishly upbeat summer camp, Addams kids Wednesday and Pugsley give an inane play about the first Thanksgiving an ad hoc rewrite, where Pocahontas leads her Native American tribe in anarchic revolt against Sarah Miller and the pilgrim fathers.

Jodie Foster’s second film as director (the first was Little Man Tate) wholeheartedly embraces Thanksgiving, and how bringing extended families together for a celebration isn’t always a good idea. Holly Hunter plays a recently unemployed single mother who goes home to her family for the holiday (it’s not just a clever title), while her teenage daughter reveals she’s going to hang out with her boyfriend instead. The story wins few points for originality, but any film with a cast list boasting Hunter, Robert Downey Jr, Anne Bancroft, Claire Danes and Steve Guttenberg is going to be watchable.

Director Ang Lee heads back to 1973 with this story of a pair of dysfunctional Connecticut families. Kicking off over a Thanksgiving weekend, The Ice Storm puts the sex lives of two married couples (and their kids) under the microscope, via a mix of affairs, teenage games, and – that ’70s staple – the key-swapping swinging party. Stage-play simple in its staging, The Ice Storm leaves the dramatic fireworks to a brilliant, multi-generational cast featuring Sigourney Weaver, Kevin Kline, Joan Allen, Christina Ricci, Tobey Maguire and Elijah Wood.

A relic from a time when email was new and exciting, and contactless payments were just a dream… As legendary rom-com writer/director Nora Ephron reunites her Sleepless In Seattle stars Tom Hanks and Meg Ryan for a spot of electronic romance, a pivotal moment in the couple’s relationship takes place in a supermarket on Thanksgiving. She’s the bookseller holding up an increasingly irate cash-only line because she’s only got a dollar; he’s the rival bookseller who saves the day by sweet-talking the cashier; the rest of us think about all the better ways they could be spending their Thanksgivings…

A post-Dawson’s Creek, pre-Tom Cruise Katie Holmes takes the lead in this ultra low-budget drama. Holmes is the April of the title, a punky 20-something who’s moved away from home to live in New York, and invites her emotionally distant family around for Thanksgiving dinner when she learns her mother (played by an Oscar-nominated Patricia Clarkson) is dying from cancer. Unsurprisingly, not everything goes to plan in an enjoyably quirky movie from Peter Hedges, the screenwriter of What’s Eating Gilbert Grape and About A Boy.

Just as Die Hard’s “exceptional thieves” figured Christmas was the perfect time to execute an audacious robbery in a skyscraper, this Ben Stiller starrer uses Thanksgiving as an excuse for an, er, heist in a tower. Stiller plays the manager of a posh Manhattan apartment block, leading a gang of disgruntled ex-employees in a raid on the building’s owner, who’s embezzled all their pension cash. It just so happens that the shady businessman is due in court on Thanksgiving, so the ragtag team use Macy’s famous parade as cover for the robbery.