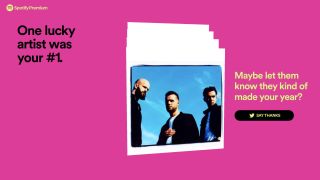 What Spotify songs did you play to death this year? Spotify Wrapped has the answer. The music streaming service's retrospective of our most-played songs, artists and albums offers us a chance to reflect on our tastes, and shows us how the image we have of ourselves as cultured, thoughtful consumers of audio may be nothing but.

Spotify Wrapped runs you through your most-played tracks from the year, how varied your tastes have been – many of us in the office were described as "genre-fluid" – the number of countries your music originated from, how many new artists you discovered, or if you'd just played Daft Punk's Get Lucky on repeat for the past several years.

It's a hugely useful tool for analyzing your changing tastes over the years – or just how much they've stayed the same – and comes with easily-shareable infographics you can post to Twitter, Facebook, or Instagram. It's no surprise that Apple has been copying the format for its Apple Music streaming service, either.

But hindsight isn't always kind to us. Even a quick sweep of the TechRadar office showed a medley of surprises and hard-to-admit favorites, with our deputy editor finding David Guetta was his artist of the decade, while it emerged that a staff writer – kept anonymous for his own safety – had spent over three days of his time listening to Counting Crows in 2019. That's 1% of the entire year.

Some staff members came out better than others: our gaming writer Vic Hood gleefully found Nirvana had been her most-played band for the decade, and continues to command our unwavering respect for her tastes.

This writer was shocked to find his most-played artist of 2019 was down to a single song – Tokyo by White Lies – being played thousands of times, rather than any of the lo-fi hip-hop artists I'd been proselytising all year. (Frank Ocean, Biig Piig, I'm sorry!)

And while it's all well and good to poke fun at our at-times mindless consumption of music – I'm reminded of my student days, when I once passed out from stress writing my dissertation, with Damon Albarn's Lonely Press Play playing in my earphones for 10 hours, and continue to have a controversial relationship with the song – the data-tracking deployed in Spotify Wrapped goes to show how hard data often doesn't line up with our own perception of a situation.

You can head to Spotify Wrapped and input your Spotify login details to see what you've been mindlessly repeating over the past decade – whether you have a free or Spotify Premium account.

So did you have any big surprises? Or don't have the strength to admit them?

As Spotify Wrapped puts it: "Here's something for you to share with the world. Or hide. Or whatever."