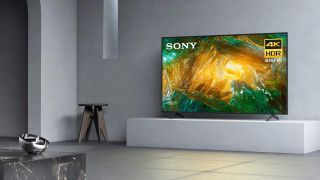 Back at CES, Sony announced the new entry-level X800H and mid-range X950H TV sets that will replace last year’s X800G and X950G screens.

What the company didn’t announce, until today, is that even the cheapest of these new ranges is going to be pretty expensive.

In a press release today Sony laid out the entire pricing structure of both series, which starts at $699 (around £530, AU$1,040) for the 43-inch X800H, and confirmed some of the series’ key specs in an email to TechRadar.

To that end, Sony’s 2020 lineup starts off with the Sony X800H, available in six sizes from 43-inches up to 85-inches, that uses the company’s X1 Processor.

In terms of features, it’s 4K HDR capable and comes stocked with Android TV and Google Assistant. From the specs it sounds like a fairly basic entry-level TV – albeit one with Sony’s exceptional X1 Processor – but, again, it's $699 (around £530, AU$1,040) and that's just for the 43-inch version.

The good news is that, at least for the X950H, Sony is making a number of improvements that justify the price tag like the expansion of X-Wide Angle technology to the 55- and 65-inch models and improved Acoustic Multi-Audio, one of the biggest issues we had with last year’s X950G.

Both the X800H and X950H are available to pre-order on Amazon and should be released in stores across the US on February 10, 2020. Availability in other regions is as yet unconfirmed.

That said, we’ve entered the age of budget TVs where it’s entirely possible to pick up a 65-inch 4K TV for under $500/£500/AU$1,000 during Black Friday and Cyber Monday. While these aren’t always the highest-end models that come stocked with X1 Processors or Android TV, some of them look surprisingly good.

The point here is that, as TVs are getting cheaper elsewhere in the industry, Sony is trying to hold the middle ground and compete in the higher-end space with LG and Samsung. It's by no means a bad place to be – there's always an audience for people who want a decent TV without breaking the bank – but Sony needs to be careful that it doesn't tread too far above the middle of the pack.