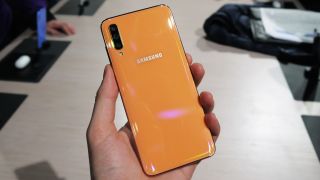 Some of the most popular Samsung phones are the Galaxy A series, the company's affordable range, with several different devices making it one of the busiest phone families. It looks like Samsung's 2021 range of Galaxy A devices are on their way, as the company has just trademarked their names.

This news comes from Twitter user @_the_tech_guy, who posted screengrabs of the trademark applications for nine Samsung Galaxy A phones - and they're named exactly as you'd expect them to be if you're familiar with the range.

In 2019, the Galaxy A phones launched with AX0 labels, from the A10 to the A90, and the 2020 range with AX1 monickers has already started to roll out, with the A51 and A71 teased for certain regions. We're expecting to see more of the latter series shown off at CES 2020 or MWC 2020, two tech shows in January and February respectively.

It's worth noting that in 2019 the Galaxy A80 was quite different to the other phones, while the A90 was a 5G device. We haven't seen the A81 and A91 yet, so we don't know if Samsung will do the same with its 2020 phones, but it's reasonable to assume that this will be the case for both the AX1 phones and 2021's AX2 series.

We don't know anything more about these phones yet, but we'll update you when we do, so stay tuned to TechRadar for all the latest Samsung Galaxy A news.