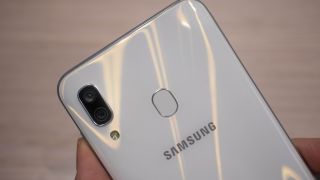 Announced earlier this week during MWC 2019, Samsung’s refreshed Galaxy A-series has made its way to India. The Galaxy A10, Galaxy A30 and Galaxy A50 will majorly target offline buyers with features such as the u-shaped notch, triple cameras and in-display fingerprint sensor.

The Galaxy A10 features a 6.2-inch HD+ display with a waterdrop style notch on the front. It is powered by Exynos 7884 chipset with an octa-core CPU clocked at 1.6GHz. The A10 will be available with 2GB of RAM and 32GB storage.

It sports a 13MP camera on the rear which has an f/1.9 aperture along with a front-facing 5MP camera for selfies.

Samsung Galaxy A30 is the mid-range phone out of the three and has a 6.4-inch Full HD+ (2340 x 1080 pixels) Super AMOLED display. The A30 sports a u-shaped notch on the front which gives the screen a 19.5:9 aspect ratio. It features two cameras on the rear which consists of a primary 16MP camera and a secondary 5MP depth-sensing camera.

The A30 is powered by Exynos 7904 chipset which also powers the distant cousins, Galaxy M20 and M30. It has an octa-core CPU and will be offered with 4GB of RAM and 64GB of storage. Buyers will also have an option to increase the storage by up to 512GB via microSD card.

The Galaxy A50 is the more premium out of the lot as it comes with features like an in-display fingerprint sensor, triple cameras among others. It uses the same Super AMOLED panel as the A30 but has three cameras on the back. These consists of a primary 25MP sensor, 5MP depth sensor and an 8MP ultra-wide angle camera. On the front, there’s a 25MP camera for selfies.

It is powered by Exynos 9610 chipset that uses an octa-core CPU and is backed by 4GB/6GB RAM and 64GB of storage.

Samsung Galaxy A10, Galaxy A30 and Galaxy A50 price and availability

Samsung Galaxy A30 and Galaxy A50 will go on sale for the first time starting March 2 across India, while the Galaxy A10 will be available somewhere down the line around March 20. All the three phones will also be available to purchase from online retailers.