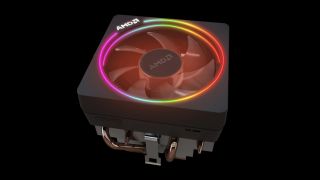 AMD’s Wraith Prism cooler, which comes bundled with some of its latest 3rd-gen Ryzen processors (and the Ryzen 7 2700X), is suffering from a surprising problem – namely fakes of the cooling solution are floating around.

Initially, it was thought that the respected RGB stock cooler had been upgraded by AMD, and just not announced yet, when photos of a very similar-looking model to the Wraith Prism emerged over at XFastest – except this one had six heat pipes, rather than the four that the standard model has.

However, AMD quickly took to Twitter to clarify that these cooling solutions with six heat pipes are illegitimate fakes designed to look like the Wraith Prism, and that they (obviously) have not been tested and validated by AMD.

So instead of speculation about how good this six pipe cooler might be, now the speculation is about what on earth is going on here. And indeed if this cooler is bundled with an AMD CPU, could there be something amiss with the chip itself?

Obviously something shady is happening, and it raises the prospect of an operation perhaps buying OEM chips, and pairing them with the fake cooler, to sell at full retail price (or possibly even fake chips – which we’ve seen in the past with Ryzen – with the fake cooler).

Although if this is the idea, quite why the cooler would be slightly different with the additional heat pipes, well, that’s anyone’s guess (in terms of not raising the profile of this counterfeiting).

Regardless, obviously you should be careful about this new counterfeit product. While it might be tempting to think that with the two extra heat pipes, this could be a better cooling solution than the official AMD-produced Wraith Prism, if it’s been made as a third-party knockoff, there’s every chance there could be all manner of things amiss in terms of the innards. Even if externally, it looks like a good copy of the original.