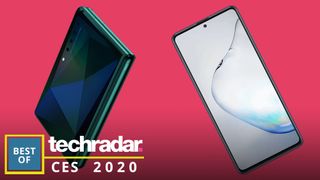 Annual tech trade show CES 2020 has seen the introduction of a variety of new smartphones, so we've put together a list of the best we've seen at the world's biggest tech show.

Some of these phones are real handsets you'll be able to buy soon and get your hands on; others are concept devices that show off what the future of phones might look like.

We've made a list of the six best phones we saw at CES 2020, and we'll run you through them all below. Some are 5G-ready, some are foldable and others are just new iterations of existing series of devices.

If you don't like the look of the camera on the back of your phone, OnePlus has a solution in the form of its OnePlus Concept One.

The cameras on the back of this device can 'disappear' when you're not using them. Basically, the phone shoots an electric current through the glass that houses the cameras, which makes the lenses invisible when you don't want to see them. It's a similar technology to what modern cars use to make sunroofs transparent.

The OnePlus Concept One isn't a smartphone you'll ever be able to buy, because as the name suggests it's just a concept device that OnePlus is using to show off its new tech.

The rest of the phone is just a standard OnePlus phone, with the phone intended simply to show off the disappearing act. Saying that, OnePlus has said this tech could come to its future smartphones.

Almost eleven months after the release of the Galaxy S10, Samsung released the Galaxy S10 Lite. It's a device that's bigger than its namesake, but some of the specs are downgraded in a few key areas.

We haven't really seen this kind of device from Samsung before that matches the size of the main flagship series but offers lower spec. There's the Galaxy S10e that came out alongside the Galaxy S10, but that is far more similar to the existing phones.

The S10 Lite actually has as much in common with the affordable Galaxy A range as it does the premium Galaxy S phones.

The Galaxy S10 Lite is a tempting device for affordable phones fans, but it's also an intriguing look into the future of Samsung's phones. Could Samsung release annual budget versions of its Galaxy S phones like Google has begun to with the Google Pixel 3a range? Only time will tell.

As well as an affordable version of the Galaxy S10, Samsung took to CES 2020 to unveil the Galaxy Note 10 Lite, a budget version of – you guessed it – the Note 10.

This new phone is the cheapest Samsung smartphone to come with a stylus, so if you like the business-centric form of the Galaxy Note phones but don't want to break the bank, it might be a great phone for you.

We don't expect to see the Samsung Galaxy Note 11 until the second half of 2020, so it would now be a great time to pick up a more affordable version of the Note series. Hopefully this phone will open the stylus-toting handset to a whole new market of people.

The affordable Samsung Galaxy A range gained two new devices at CES 2020, the Galaxy A51 and this, the A71, one of the most high-tech mid-range devices ever.

The device has a huge 6.7-inch screen, four rear cameras including a 64MP main snapper and a chunky 4,500mAh battery. On paper, it looks like it'll be great for a variety of users.

If this is indication of how the Samsung Galaxy A phones will look in 2020, it's a sunny forecast, and we're looking forward to seeing more of the devices throughout the year.

We've been waiting for affordable an 5G phone to be announced, and it looks like TCL wants to be one of the first to release one with its TCL 10 5G. The handset was launched alongside the TCL 10L and 10 Pro, although it's not quite like either.

The main selling point here is that TCL promises the device will be available for under $500 (and likely around £500, AU$700), which would make it much more affordable than most other 5G handsets on the market.

This is a forecast for 2020 as it seems many more companies could try to produce 5G phones that are cheap enough for most people to buy. It may all start with the TCL 10 5G, one of the most interesting mid-rangers from CES.

We've seen TCL's foldable phone before, but at CES 2020 the company showed off a new version of its flexible device with some intriguing developments.

The biggest news here isn't that there's a new foldable phone, but what it means for the new form factor. Like with 5G phones, TCL is trying to develop a folding device that's affordable enough for most people to buy.

TCL want to make a device that doesn't cost a huge four-figure sum, like the Samsung Galaxy Fold, but an affordable range of handsets that are cheap enough to compete with normal smartphones.

The device might not quite be ready for a release just yet, as the design still feels a little fragile, but if this gets into our hands some time soon it might be enough to pressure other companies to make affordable foldable phones too.