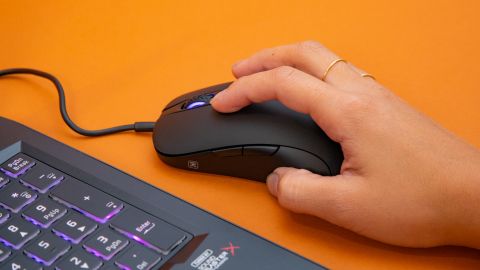 A couple design nitpicks can’t keep this fantastic mouse from living up to the Sensei legacy. A top-of-the-line sensor and some truly impressive customization options make the Sensei Ten one of the best gaming mice we’ve used this year.

2019 marks the tenth anniversary of SteelSeries’ original Sensei mouse design, a truly iconic gaming peripheral that set the bar for high-performance mice in the years following its release. It’s seen several different iterations along the way, the most recent being the Sensei 310 released in 2017. While that mouse is a fantastic bit of hardware in its own right, many fans missed the classic Sensei design, a sentiment that SteelSeries has heard loud and clear.

Enter the new Sensei Ten, a return to form for one of esports’ favorite mice. SteelSeries has resurrected the original ambidextrous Sensei shape, and enhanced its performance with a top-of-the-line sensor and a sleek, matte finish that feels great in the hand. There’s also some fancy RGB lighting, profile customization, tilt tracking, and new click switches.

By pricing the Sensei Ten at $70 (£54, AU$103),  SteelSeries is pitting it up against some fierce competition, such as Corsair’s Glaive and Razer’s DeathAdder Elite. But you don’t become a beloved gaming mouse by resting on your laurels. The Sensei Ten holds its own thanks to a fantastic combination of legacy and modern sensibilities, making it one of our favorite gaming mice of 2019.

The Sensei Ten boasts a true ambidextrous design, with a symmetrical seven button layout that accommodates any grip style. The matte finish feels nice and smooth in the hand, and the silicon pads on the sides provide ample grip. We don’t experience any discomfort when handling the mouse, but the side buttons can be easy to click by accident thanks to the concave finger rests. After a while, though, our hands adjust and this ceases to be a problem.

Weight is one of the most important qualities to consider when picking out a gaming mouse, and everyone’s tastes are different. In our opinion, the Sensei Ten feels a bit on the lighter side, lacking the satisfying heft of some other options on the market. This isn’t a dealbreaker by any stretch, but it is certainly something to be aware of while weighing your options. The connection cable is also unfortunately not braided, which feels like an oversight for a flagship mouse model like the Sensei.

Moving to the buttons, SteelSeries employs a dual spring mechanical switch that ought to be industry standard. The buttons have one of the most satisfying and tactile clicks we’ve experienced in some time. There's both a soft and crisp quality to them that’s hard to describe in a text-based review, but suffice to say they’re among the best mouse buttons we’ve played with this year. The thumb buttons are a bit lighter by comparison, but they perform just fine even if they’re not as gratifying as the left and right clicks.

We appreciate the low profile and the grippiness of the scroll wheel, too. There’s enough resistance there that it’s hard to accidentally scroll, but it’s not a pain to do so on purpose.

The Sensei Ten is equipped with the TrueMove Pro optical sensor, designed by SteelSeries and PixArt. SteelSeries’ official site boasts that it’s the best tracking sensor on the market, and while that’s a difficult metric to measure, the Sensei Ten performs about as smoothly as they come. Capping out at 18,000 CPI, and boasting some impressive acceleration and deceleration customization options, the Sensei Ten performs exceptionally during testing in Apex Legends and Overwatch.

Speaking of customization, the Sensei Ten comes with a suite of options via the SteelSeries Engine 3 software. Here, you can change levels for CPI, polling rates, angle snapping, and the aforementioned acceleration and deceleration values. The mouse features a CPI adjustment button on its face that lets you switch between five settings on the fly. You can adjust the specific CPI values for each level here, which is hugely useful when switching between shotguns and sniper rifles in Apex Legends.

Aside from button action and CPI profile customization, you can adjust the RGB colors for the SteelSeries logo and scroll wheel backlighting. The robust suite of options let you choose to set just a single color, or a series of colors to rotate between via a breathing effect. You can also set the backlighting to change color upon clicking one of the buttons, which produces a really cool effect during tense firefights. Also noteworthy is the fact that the mouse wheel and logo lighting can be customized independently.

One of the best features of the Sensei Ten is the ability to store your button profiles and color options onboard the mouse itself. Once you’ve saved your preferred settings, you can take the mouse with you, plug it in, and have your settings ready to go without having to download any software.

Tilt tracking is another bullet point feature touted by SteelSeries, and we’re glad to report that the Sensei Ten performs well on that front too. While contesting control points in Overwatch, the mouse was lifted and placed down at every conceivable angle. We didn't notice any cursor jumping during these heated moments, which kept enemies squarely in our crosshairs.

The SteelSeries Sensei Ten comes with a sizable legacy to live up to, but it’s more than up to the task. It manages to retain the best parts of the original Sensei design philosophy while adding in some impressive tech and customization, even if there are a few minor nitpicks on the design front.

A comfortable ambidextrous mold is something of a tricky prospect, but SteelSeries nailed it a decade ago, and the Sensei Ten doesn’t mess with that design. Instead, it’s been enhanced by a great matte finish and one of the most satisfying button clicks in the industry. If you’re looking for a quintessential gaming mouse with some killer features, the Sensei Ten delivers on nearly every front.