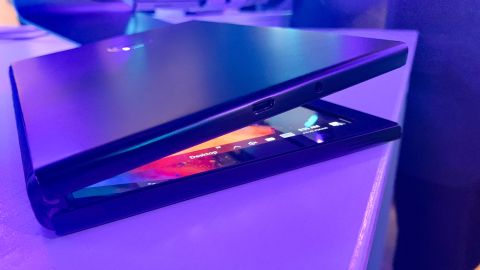 The Dell Concept Duet is definitely an interesting laptop concept, and goes a long way to reassuring anyone that's skeptical about the way foldables may work in the future. Still, we have no idea if or when this device will actually make it to market.

When the Samsung Galaxy Fold hit the streets last year, we figured it was only a matter of time before foldable devices like the Dell Concept Duet appeared. Now, the Dell Concept Duet is definitely not the first foldable computing device we've seen - Lenovo came first out of the gate with its Lenovo ThinkPad X1 Foldable, but even that device hasn't come to market yet.

So because we haven't seen a device like this from a major manufacturer out in the wild, we don't quite know how well these devices will actually work in the mainstream, or whether people really want them in the first place. Dell is still out here trying to make it work though with the Project Duet.

Just keep in mind though that this is a concept device shown off at CES 2020, so it's not guaranteed that it will ever actually come out.

Because this is just a concept Dell isn't gracing us with a release date or even a release window. The whole point of this device is to give an idea of Dell's vision around foldables, and while the device seems kind of buggy, that's only to be expected in a product this early in development.

This of course means that we have no idea how much it will cost when or if it hits the market, but because it's such a cutting-edge and futuristic piece of hardware, you shouldn't expect it to be cheap. We guess we'll see what pricing looks like if Dell ever makes a full announcement of the product.

The Dell Concept Duet is clearly a prototype. It's not exactly the most beautiful device on the planet, with its thicc bezels and plain-looking outer chassis, but it doesn't need to be pretty at this stage, it has to fold.

And, fold it does. Dell didn't give us dimensions on the device, but it looks like the screen is around 12-13 inches diagonally, which folds in half to simulate two different displays. They're touch-enabled, obviously, which means you should be able to use it effectively in either configuration. However, anyone that's used a touch keyboard on Windows 10 knows that's not the ideal way to interact with that operating system.

Instead, Dell had a little magnetic keyboard that will apparently live on the back of the device until you're ready to fold it into laptop-mode. Then, you can simply detach it from the back of the device and attach it to the bottom screen, basically making for a traditional laptop experience. It's not the most elegant solution possible, we're sure, but it works and that's the first step.

One thing that we thought was definitely missing, though, was a stand around the back of the device. You'd think that a lot of people would love to detach the keyboard and use the device like a laptop, but with the full screen. Again, this is only a prototype, so we can only imagine that Dell will come up with some kind of solution for this. We will admit that a stand that can fold with the laptop may be kind of problematic.

Still, this is a foldable laptop from Dell, and we're impressed that the design works as well as it does. When the final design finally rolls out and the Dell Concept Duet becomes a full product, we're sure that it'll at least be worth taking a look at.

Because the Dell Concept Duet is essentially just a prototype, we don't really know what's powering it. We can assume that it will probably be rocking the latest Intel Ultrabook-class processors when and if it finally releases, but beyond that is basically only known to the engineers at Dell.

However, the bigger question is how well will Windows 10 work on a foldable device like this? There are only a few laptops out there that have multiple displays, like the Asus ZenBook Pro Duo, but even those don't work quite like this. We do know that Microsoft itself is planning on putting out the Surface Neo, which will be a similar device at the end of 2020, but we still haven't seen it in action.

The build of Windows 10 we got to see in action on this prototype wasn't exactly working flawlessly, and there were a number of bugs that popped up on the Dell Concept Duet while it was being shown to us. But, again, this is entirely down to the fact that this product is not ready to see the light of day.

With that said, it's cool to see in action and we can't wait to see how foldable devices like the Dell Concept Duet perform in the real world when they're finally ready.

It's almost too early to say anything definitive about the Dell Concept Duet beyond "it seems pretty cool." Without seeing the final design, we can't really tell if it's a device that you'll want to show off at your local coffee shop. Also, without the specs, we can't say whether or not it will be able to handle your daily workloads. However, Dell has told us repeatedly that it won't put out a product that doesn't work, so hopefully all the kinks get ironed out before the laptop hits the streets.

Until then, we won't have any idea how this device will work in the real world. Even if it never comes to fruition, we can still look at this early version and imagine what the future of laptops will look like.