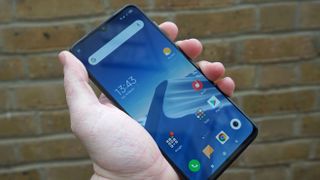 The Xiaomi Mi 9, above, could soon get a seriously powerful successor (Image credit: TechRadar)

The Samsung Galaxy S20 and its siblings are the early-2020 phones with the most buzz around them, but based on a specs leak the Xiaomi Mi 10 Pro could be just as deserving of attention.

A screenshot shared on Twitter by Xiaomishka (a source with a limited track record but known for their Xiaomi leaks) seemingly shows the ‘About phone’ screen of the Xiaomi Mi 10 Pro, complete with an almost full specs list.

Highlights of this leak include a Snapdragon 865 chipset and a massive 16GB of RAM. Currently no smartphone has that much RAM, and paired with that top-end chipset this could make the Xiaomi Mi 10 Pro the most powerful phone of early 2020.

Other listed specs include a huge 5,250mAh battery, 512GB of storage, and a quad-lens camera, with a 108MP main sensor alongside 16MP, 12MP and 5MP ones. Presumably they'll be joined by zoom, ultra-wide angle and macro lenses, in some configuration.

The only aspect of the listed specs that’s slightly less impressive is the 6.4-inch screen, because it apparently comes in at a resolution of just 1080 x 2080 – making it FHD+, where most big name flagships now have QHD+ screens.

It’s worth noting however that these specs are at odds with an earlier leak, so we’d certainly take them with a pinch of salt for now.

In any case, we should know just how powerful the Xiaomi Mi 10 Pro really is soon, as it’s likely to land alongside the standard Xiaomi Mi 10 very soon, with one rumor pointing to February 11 – the same day as the Samsung Galaxy S20.