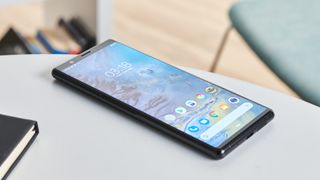 Sony's flagship line of phones is set to expand again in 2020, if the latest rumor turns out to be true, as a new leak suggests the company will be introducing four new handsets throughout the year that will all sport top-end specs.

According to a new leak from Japanese website Android Next, the company is set to introduce an Xperia 0, Xperia 1.1, Xperia 3 and Xperia 5.1.

All four of these phones are rumored to be powered by the upcoming Qualcomm Snapdragon 865 chipset and support 5G connectivity, but will come in a variety of sizes and with different specs on each.

The leak suggests the Xperia 0 will be the highest spec device, but it's unlikely to launch until towards the end of the year at IFA 2020 - that's an event that takes place in August - with the other handsets likely to launch sooner.

The Xperia 0 is expected to have the most cameras out of all the devices with six on the rear and a 5K display on the front of the phone. We've previously seen a similar camera leak for a Sony phone with six lenses on the rear.

The Xperia 1.1 is reportedly ready to be introduced at MWC 2020 in February - that makes sense as the original Xperia 1 was unveiled at that show this year - and will likely come with a 4K display and four cameras on the rear.

Android Next's leak also suggests an Xperia 5.1 will be announced alongside it with four rear cameras and a QHD display. There's also rumors of an Xperia 3 that will come with a QHD display as well as three rear cameras, but there's no rumored launch date for that product.

On top of all this, the leak suggests the company will be introducing a new series of mid-range devices that are likely to be follow-up products to the Xperia 10 and Xperia 10 Plus. These are also expected to come with 5G support, but won't sport the top-end chipset.

All in all, we're taking this information with a pinch of salt, but it does make sense that Sony will be updating its series of devices after introducing a relatively small line of handsets in 2019.

It's unlikely we'll hear anything official from Sony until next year, with February's MWC event likely to be where we see the company officially unveil its next series of devices.