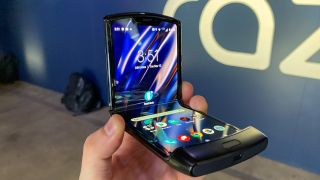 The Razr 2 might not have the big chin of the Razr 2019, above (Image credit: Future)

Approved on November 21 and spotted by LetsGoDigital, the Motorola patent shows a device that looks a lot like the current foldable Razr, but with a couple of key differences.

First, there’s a fingerprint icon on the screen, suggesting the fingerprint scanner would be built into the display. That would make sense – and it would be a more elegant solution than the scanner below the screen on the Motorola Razr 2019 – although the patent doesn’t make any mention of this beyond the image.

What the patent is instead focused on is eight sensors at the edges of the screen – four on each side. These can be used as customizable buttons that can be accessed whether the screen is folded or unfolded.

As well as presses, these sensors can also respond to gestures, such as a swipe, and can be configured to do different things depending on whether the screen is open or folded shut – so basically they would allow for plenty of shortcuts and quick settings toggles.

It’s worth noting too that the phone shown in these images lacks the chin of the Motorola Razr 2019, with the in-screen fingerprint scanner sitting where that would be. That could mean the Motorola Razr 2 won’t have a chin, but again we wouldn’t read too much into this, as the images are just there to illustrate the side sensors.

There’s also no guarantee that the Motorola Razr 2 will have these sensors, since while Motorola is clearly exploring the idea, features mentioned in patents don’t always make it into finished products.

It's likely to be a while before we find out for sure, so stay tuned for updates, as TechRadar will bring you all the reputable Motorola Razr 2 rumors as and when they surface.