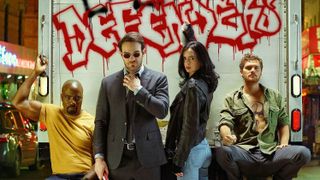 Marvel Television, the part of the company responsible for shows like Daredevil on Netflix and Agents of SHIELD, will soon be shutting down, according to a report on Deadline. This will result in layoffs for what's described as a "significant portion" of its staff. The remaining team members will be folded into Kevin Feige's Marvel Studios, and some existing projects will carry across.

Those projects include Helstrom for Hulu and a final seventh season of Agents of SHIELD, as well as four adult animated projects for Hulu (MODOK, Tigra and Dazzler, Howard the Duck and Hit Monkey). That'll be it for new shows, though, as further projects are apparently being put on hold.

"The decision has been made to complete Marvel TV projects that are currently in production, but not continue with any further development," the division told Deadline in the report.

The difference between Marvel Studios and Marvel Television seems complicated if you're not following the daily ins and outs of the entertainment industry. In August 2015, the structure of Marvel Studios was changed so president Kevin Feige reported to Disney's Alan Horn, rather than Marvel Entertainment's Isaac Perlmutter.

The TV division, though, stayed under Marvel Entertainment. From the outside looking in, that's why it felt like Marvel's TV shows were out of step with the movies for a long time, with later seasons of Netflix's Defenders shows rarely connecting to the stories of the movies.

In October 2019, Feige was promoted to Marvel's Chief Creative Officer, which places parts of Marvel Entertainment like the comics publishing arm and Marvel Television under his management. By this point, Marvel Studios was already making the big blockbuster TV shows for the Disney Plus streaming service: The Falcon and the Winter Soldier and WandaVision are produced by Feige and Marvel Studios and not Marvel Television, for example.

Meanwhile, a lot of Marvel Television's larger projects have been winding down in recent years. There were once five Netflix Marvel shows - Daredevil, Jessica Jones, Luke Cage, Iron Fist and The Punisher, of wildly variable quality - and now they've all been canceled. Hulu's well-received The Runaways is ending this year, too, and Cloak and Dagger was axed earlier this year.

Ultimately, this will lead to a world where Marvel's shows are more connected to its movies. Marvel's Phase 4 will factor TV shows into the canon, which is a bold move. That's not to say Marvel Television didn't create some great shows with their own flavor – the first season of Daredevil remains a fantastic 13 episodes of TV, and Agents of SHIELD has its own passionate fanbase – but it makes sense to try and link them up more to further the viewer's investment in the MCU.