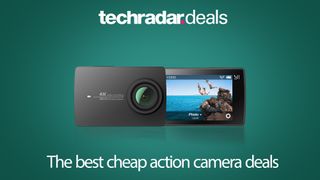 We're rounding up the best cheap action cameras around so you can get snapping away on your next adventure for less. The GoPro has reigned in the world of action photography for a while now, so we're taking a look at what the competitors have come up with, and we've learned you don't need to spend a fortune to shoot crystal clear 4K.

These cheap action cameras all regularly come in under $200 / £200, and often far less than that as well - thanks to all the deals they receive. We're looking for high-quality 4K with a strong selection of shooting modes and features, as well as enough accessories to get any newbie off the ground straight away. It may sound like a tall order at this price point, but we've found cheap action cameras meeting these criteria for less than $50 / £50.

So, if you've ever had a hankering to capture your vacation in glorious definition but have been scared off by those pesky GoPro prices, check out the cheap action camera deals we've lined up for you below.

The cheapest of the cheap (still worth buying)

While a GoPro can set you back as much as $400 / £379 , the Dragon Touch Vision 3 cheap action camera is able to effortlessly knock a whole zero off that price tag, coming in at just $40 / £35. The folks over at Dragon Touch didn't skimp on the features either, with the Vision 3 Pro offering a surprising depth of use when compared to other cheap action cameras. A remote control is included and while you're not getting Electronic Image Stabilization in here, you won't find 4K footage for $40 much better anywhere else right now.

Put simply, it's the best you'll get at this low price point and it packs a ton of accessories in as well. The Dragon Touch Vision 3 is a fantastic starter camera capable of holding up to more expensive makes and models without the risk of a scratch costing you hundreds of dollars.

A cheap action camera from a fan favorite brand

Akaso is well known for producing high-quality cheap action cameras with a range of features and specifications usually reserved for the more elite names. This particular EK7000 Pro model does dip a little in 4K framerate potential, dropping down to 25fps which is a little disappointing considering the 30fps we've been seeing on cheaper models. That said you're getting fantastic picture quality even at that shutter speed and 16MP to play with for your stills.

Use the Akaso app to connect to, and control, the camera and even download 1080p content direct to an external device. To sweeten this action camera deal even more, the Akaso is also compatible with a wide range of GoPro accessories if you're picking up a cheap camera to replace a broken one.

An accessory-packed action camera perfect for starting out

£78.86
View Deal at Amazon
Electronic Image Stabilization with gyroscope
Up to 128GB SD card size
Excellent photography and video with fast shutter
Ships with loads of accessories and a carry case to keep them all in
No remote control
No touchscreen

The Apeman A80 is an incredibly light action camera with the sturdiness and build quality of something sitting at a far higher price tag. Boasting 4K footage at 30fps doesn't hurt either, and the amount of accessories you're picking up at this price tag is fantastic. You're getting a range of different mounts, cases, cables, and an extra battery in this kit, making it excellent value for money.

Footage itself is clear and made even better with the Electronic Image Stablization you're getting straight out the box - an excellent feature at this price point. You'll also get the chance to play with time-lapse, burst and motion detection modes to mix up your cheap action camera uses.

Overall, the Apeman A80 is so easy to use, quick to produce fantastic results, and comes with so many extra accessories. It's easy to see why it's a favorite for those starting out with a cheap action camera.

Pretty damn close to a GoPro

The Asako V50 Elite may be the closest you'll get to some of the more high-level GoPro features and quality at this price point. Not only are you getting voice control included in this cheap action camera deal, but 8x zoom and slow motion video make for excellent added shooting modes. A 20MP stills lens will come in handy for crystal clear photography and impressive 60fps 4K footage that delights at this price.

Not only does the V50 Elite offer a broad range of more expanded functions, but it doesn't let go of its ease of use with such a step up in performance. It's still incredibly intuitive and offers a starter just as much of a helping hand in the world of action cameras as some of the cheaper options on our list.

The Yi 4K is likely to be the most expensive action camera on this list, but it still provides Go Pro-level features and quality at a far cheaper price point. What separates this particular model from others on this list is its strong battery life. It boasts 4K filming potential for nearly two hours, whereas others may max out at 90 minutes. That's excellent news if you're planning on some extended sessions with your cheap action camera, and with such high-quality 4K footage, you're going to want to.

At half the price of the GoPro you're getting much of the same functionality. Sure, there's no voice control and there's obviously more attention being paid to the video side of things than the 12MP stills potential, but if you're after a cheap action camera with the strength to take on the giants you're looking at a winner here.

What to look for in a cheap action camera

If you're just getting started in high octane photography, picking up a cheap action camera is an excellent way to explore each feature with a low-risk device. But that no longer means that you have to settle for amateur quality footage, however, thanks to the range of features now available at a much lower price point. That said, what are the bare minimum requirements for a good cheap action camera price?

Even super cheap action cameras offer 4K footage as standard now, so there's little reason to pick up a camera that's maxing out at 1080p unless it has some serious guts behind it. That said, even at 4K, you're still not guaranteed the crisp footage you might have seen from a professional grade GoPro. You'll still be on the lookout for how your cheap action camera reacts to different lighting levels (and how quickly it reacts to light changes in most use-cases), as well how many frames per second you'll be shooting at that footage quality. Make sure you keep one eye on battery life as well, and if you're disappointed, check how easy it is to pick up extra backup battery packs for your chosen device.

The cheap action cameras listed here all offer 4K footage at mostly 30fps (and the 25fps model has some serious benefits in other areas that make it desirable for certain situations). This is the level of frame speed and resolution you'll be browsing for an action camera price point we're seeing here today. But beyond that, you'll also want to make sure your prospective cheap action camera offers the features and functions you'll likely be using (more on that below).

How to find the best action camera price

A cheap action camera has to be precisely that - cheap. That's not to say you have to settle for lesser quality than the Pro's, however. Instead, you'll be on the lookout for  the exact features you want without having to pay for the extraneous modes and functions you won't be using. These extras often drive the action camera price right up, but it's possible to find precisely what you're looking for without the unnecessary fluff.

If you're after a cheap action camera to attach to a bike or skateboard, then you'll be less focused on incredible waterproofing and drone-mode capabilities and looking closer at those Electronic Image Stabilization features. Then again, if you're looking for the best action camera price to suit ad-hoc vacation footage, you might look for a camera without too many in-depth features, but a killer battery life, lightweight footprint, and easy WiFi connection to your phone. If you're just starting out and looking for a practice set, you'll find plenty of cheap action cameras on this page sacrificing some of the more obscure functionality for a comprehensive bundle of accessories and a more intuitive touchscreen user interface.

The bottom line is, when looking for the best cheap action camera price, you're free to pick and choose the features that will apply to you. The best way to find the most attractive price is to streamline your search around your own needs.