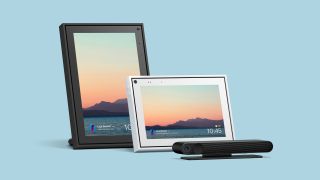 A year later, it's clear Facebook is going all-in on its smart displays. Although the Portal devices offer a number of different features, like photo display and Alexa integration, they're primarily focused on video-calling. This makes sense given how popular FaceTime, WhatsApp and Messenger video calls are these days.

However, with competition from the likes of the Amazon Echo Show and Google Home Hub, as well as rising privacy concerns when it comes to smart home tech and Facebook, the big question is: should you buy a Facebook Portal?

We take a look at all of the Facebook Portal devices currently available to buy, what makes them stand out from the crowd and why they might (or might not) be worth adding to your smart home too.

Facebook Portal is the name for just one product in a whole range of smart display devices from Facebook.

The Facebook Portal (£119 / $179 / approx. $230 AUD) is the original model and has recently been seen a sleeker 'picture frame' design. It's a smart video-calling device that has a 10-inch display and is a rival to the Amazon Echo Show.

It has Alexa built-in and can be used to play music, check the feed from other smart products (like a Ring video doorbell), display photos, play with AR effects and more.

However, its big draw is video-calling, with a smart camera that moves when you do to make chatting to your friends and family easier. It also has a microphone that minimizes background noise.

Importantly, whoever you're speaking to doesn't need to own a Portal to receive your calls. As long as they have Facebook Messenger or WhatsApp on their smartphone or tablet, you're good to go, with up to seven different people on one call.

The Portal Mini is just like the Portal and Portal Plus, but it has an 8-inch display for smaller rooms and surfaces. Whereas the Portal TV is a little different. It's a webcam that tethers to your television via HDMI.

That means your TV then becomes your smart display and the Portal TV adds a camera, microphone and Alexa to it. So it's just like the Portal, but with a big screen – your TV screen.

If the idea of giving Facebook a (quite literal) portal into your living room makes you feel a bit weird, then you're not alone.

Luckily Facebook has built-in a bunch of privacy features to make users feel a little more comfortable. For starters, all Portal video calls are encrypted and, according to Facebook, the AI technology within the camera and microphone run locally on the devices themselves rather than on Facebook's servers.

There are also other software settings for privacy, including turning off the camera and microphone, as well as a physical mute switch and small camera cover on all of the devices.

Although this is all reassuring, we still wouldn't blame you if you'd rather not have the social network that knows all about you already – and was hit with a $5bn fine this year over its handling of user data – snooping in your home too.

If you do a lot of video calling with friends and family, the Facebook Portal, Portal Plus or Portal Mini could be worthy contenders for a smart display so you don't always have to use your smartphone or tablet.

This is especially true if you were considering one of the similar devices from Amazon, like the Echo Show.

Of course, the size you choose depends on the space you've got to spare in your home. The Portal is probably the best bet for most people, but the Mini or Plus are also worth checking out if you either want a huge display or have limited space.

The Portal TV is a little different. Rather than being a smart screen you can easily keep on a kitchen counter or coffee table, it relies on your TV. This is good because there's limited support for home video calls through your TV with other services (especially because Skype shuttered its smart TV app) but in our Facebook Portal review we weren't impressed by the fairly low camera quality.

What did TechRadar make of the new Facebook Portal devices? We'll be updating this section as we spend more time with the new Portal smart screens.

"For home video calls through your TV – something with quite limited support elsewhere, especially after Skype shuttered its smart TV app – there’s certainly a reason to get the Portal TV into your living room. Low camera quality and shoddy zooming, though, holds it back from greatness; not to mention its association with an increasingly scrutinised Facebook brand."