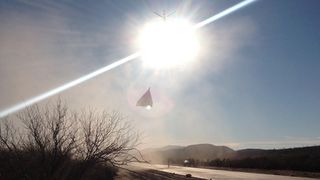 Good afternoon. It is Friday. In case you're already off to the pub, here is One More Thing: TLDR edition.

The internet is weird. A man has some money. A phone may have caught fire. A man lied about some stuff. A giant paper plane has flown a bit. Some birds are angry. There are some apps. And some adverts. And some videos.

See you next week.

World of WEYOO-craft – A largely unsubstantiated study suggests that if you want to find lurrrrve, you should ditch eHarmony and get on World of Warcraft. The reason basically being you want to play the percentages – there are more people on WoW which equals more chances at lurrrrve. We can stop saying lurrrrrve now, if you want. [OnlineUniversity]

Weekly Kim Dotcom update – The story so far: Kim Dotcom is in the clink, which he's not too happy about because it lost him his status as world's #1 CoD player, but he might get his schwag back so it's not all bad. Now it emerges that the New Zealeand courts have granted him and his family $60,000 (£39,365) a month for living expenses. Lend us a fiver, Dotcom? [Slashgear]

Great iPhones of fire – Forget the over-heating iPad, it's exploding iPhone 4 handsets that you need to be worrying about now – a lady in Colorado claims that hers made like Rice Crispies by "crackling" and "popping" before filling her hotel room with smoke as she charged it overnight. Snap's whereabouts are unknown. [Mashable]

Too close to the sun – The guy who claimed to have used Wii controllers and an HTC phone to create wings that allowed him to fly has admitted it was all a hoax. Stupid lying flying man. "Exercise in online storytelling" our foot. [BBC]

Twice shy – Regardless of the last story, we so want to believe that this one is true. The folks from the Pima Air & Space Museum made a 45-foot paper plane that they then flew across the Arizona desert. Sure, it was taken up by a helicopter and flew for only a few seconds, but it's still more successful than every paper aeroplane we've ever made. [Great Paper Airplane]

In a world where apps support Retina Display – While the rest of the developer world works feverishly through the night to update their apps to that coveted 'supports Retina Display' status, Apple's had a bit of a headstart so iTunes Movie Trailers is now Retina Display ready, bringing you HD movie trailers in all their incredi-screened glory. [TNW]

Blame it on the weather man - Google wants to use your phone to check how the weather is where you are, so it can send you weather-appropriate adverts. So, adverts for air conditioning on hot days, umbrellas on rainy days and so on. Neat idea, shame about the advertising. [Telegraph]

King Harrod – Yesterday, your faithful One More Thing A-Team schlepped over to Knightsbridge to check out Harrods' new tech floor. It was a real chore. We were force-fed champagne and hobnobbed with people who later turned out to have been footballers and models. Tough job etc etc. If you're in the neighbourhood, you too can pop up to the third floor and gaze longingly at the £600,000 ($950,000) 4K Panasonic TV or the colourful Loewe Connect. [PR]

Do the Drape – This 8-bit Mad Men choose-your-own-adventure style game has had us hooked today if only for its pithy reductive commentary. There are three different endings to find your way to by watching videos in various orders. A pretty sneaky ploy for repeat viewings but you can't say it hasn't worked. Also, if you aren't up to date on Mad Men: SPOILER ALERT. [YouTube]

Big time birds - Rovio is publicising its new intergalactic instalment of Angry Birds by pretending to launch a giant disgruntled aves into the stratosphere by catapulting it from Seattle's Space Needle. Presumably the giant shark is lurking somewhere in orbit for the bird to sail over. [Rovio]